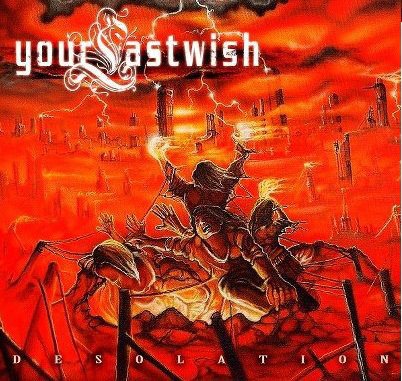 Your Last Wish are a female-fronted, 5-piece melodic death metal band hailing from Montreal, Quebec with two full length studio releases under their belt: a self-titled debut (2007) and Desolation (2012), which this review will focus on. The band's music is very much in the vein of Amon Amarth, but the only difference is that the band use 8-string guitars and the growling vocals are higher pitched compared to Johan Hegg's vocals, and the singer is female.

The album starts off with a symphonic intro which leads right into the chaotic "Crisis Of Creation" containing a mix of thrash metal, black metal and death metal influences. Of course, if you're a band from anywhere in Quebec, your album has to have a song or two with French lyrics, and Your Last Wish's French songs on this album are "Le Pacte" and "Mutation", and they are merveilleux. "Standstill" features guest vocals from Martin Lalonde. It's always exciting when two vocalists are trading off on vocals. "Creep" is a constant thrasher, which is guaranteed to keep you headbanging all the way through, and definitely sounds like Amon Amarth with the giant hooks and harmonized leads. "Experiments" is an instrumental track which features violins playing over a very soft guitar melody. This would be a perfect soundtrack to a scene in movie where a horde is marching in for an epic battle.

The album's closer is the title track "Desolation". The track contains a section where the riffs are very much in the vein of Meshuggah due to the use of 8-string guitars and tuned to a pretty low tuning, although this doesn't last for the whole song. There's nothing much to complain about on this album. The musicianship is very solid and the vocals are aggressive and I think fans of Amon Amarth, The Black Dahlia Murder and Meshuggah will definitely enjoy this album!