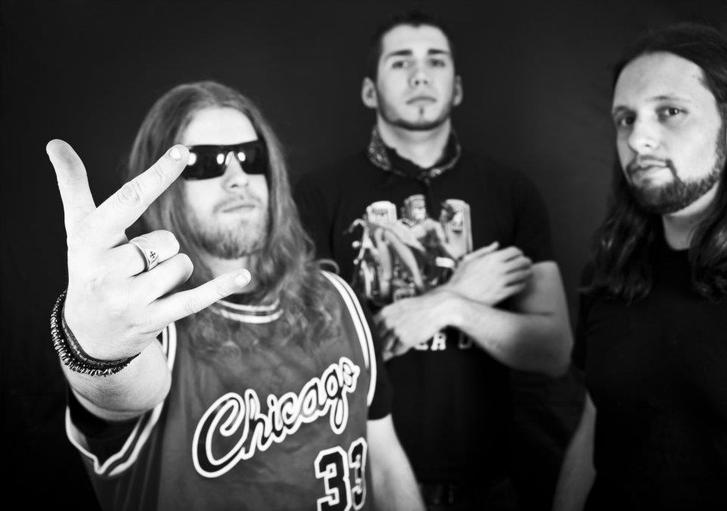 The name XII Boar brings to my mind images of a compact, tough, rampaging beast, rooting for whatever it can to sustain itself. When cornered a wild boar male will attack, slashing with its sharp tusks and fight to the death. I chose to review XII Boar based upon the name of the band, without having first listened to them. This is one of the times when my intuition paid off.

And so I sat down to listen to XII Boar for this review. And I was immediately hit with a wall of testosterone laden sound that assaulted my ears and brain! The band is compact, just three members, but tough, sinewy and definitely fighting for a rightful place in the Metal music world. I first listened to the band’s songs on their band page on Facebook. Smokin’ Bones, Hellspeed Viper, Slam Hound and Train Wreck. If I’m ever involved in a train wreck, I hope to be listening to Train Wreck. What a fitting end that would be for this ole’ rockin’ Metal Head! These songs are pounding, high energy songs. Bass heavy, drum driven music with a mix of distorted guitar riffs, squealing guitar solos and tough, raw vocals. I call this drivin’ music. I imagine myself back in the western U.S. deserts, speeding through the hot, dark nights along empty stretches of flat and endless highways, stereo blasting, full-throttle, enjoying the solitude, and wishing the night to never end.

XII Boar released a four song EP, titled “Split Tongue, Cloven Hoof” via their website on 28 January 2012. I was fortunate to be there that day and got the downloads for free. This EP release includes Train Wreck along with Sludge, S.K.O.L. and Beg, Borrow, Steal.

XII Boar is a three piece band that creates louder, fuller sound than many bands can make with more personnel and instruments. I want to party with these guys! And that is what I am planning to do tonight with, at least, their music to keep me drivin’ onward in my studio. This is testosterone laden, powerful, rockin’ Metal that is just what I need late at night to fuel my thrashing, smashing, slashing style of painting.