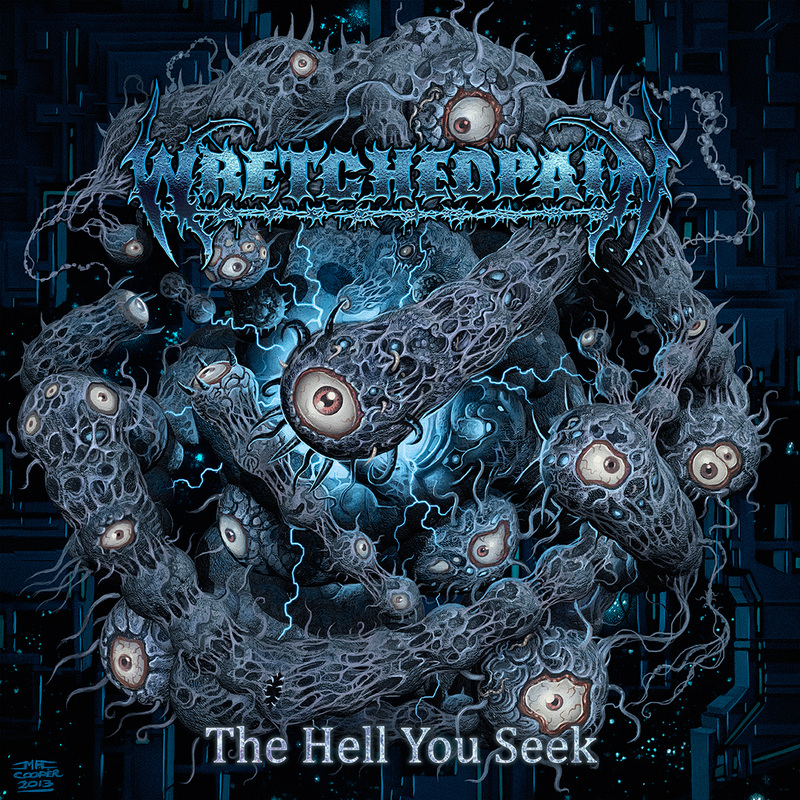 With a heavy death metal influence that has the potential to create a horde of headbangers and moshers at their shows, Wretchedpain has shared stages with Suffocation and Kittie as well as having been nominated for Heavy Metal Group of the Year at the Niagara Music Awards. They have recently come out with their new E.P, The Hell You Seek (2013) which features grim guitar riffs, fast-paced heavy drums and vocalist Joey Glacken's low, guttural vocals mixed with occasional melodic or groove arangements. Sounding like a darker Devildriver, this E.P is filled with moshpit material and songs that make your head follow along with the galloping beats. With many guest appearances adding their own touch to the tracks, The Hell You Seek becomes a versatile compilation of songs that any Death Metal fan will love.

The Hell You Seek E.P opens with the track "Hatriot," which calls for your attention as Glacken screams a rhythmic repetition of "Hatriot!" in the opening. Guest vocalist Jon Howard of Threat Signal adds a little extra depth to the song with his deep vocals pairing with Glackens's. However, Glacken himself transitions from low growls to highs easily and leaves the middle ground for his guest appearances.

The title track of the E.P, "The Hell You Seek", is one of the faster songs with guitarist Aaron Guthridge incorporating some impressive wailing solos and fast riffs. Though this track relies heavily on Death Metal elements, "The Hell You Seek" is really the only track that does so. Every other song strays a bit from the traditional Death Metal sound enough to incorporate a different edge to Wretchedpain's sound. I really enjoyed these small surprises throughout the E.P which made each track unique.

Wretchedpain has many impressive guest appearances in addition to Howard such as Kris Norris (ex- Darkest Hour), John Bechdel (Ministry) and Robert Meadows (A Life Once Lost). These talented musicians add a different touch to their respective songs that incorporate well with Wretchedpain's already heavy sound. For example, in the last track of the album "The Lessons of the Wise and Dumb", we get keyboards that add a symphonic element to the track and end the E.P on a lighter note. On "Laced With Cyanide" we even get a bit of clean vocals near the end of the song that really changed Wretchedpain's sound as Glacken screams the lyrics along with the low, echoing vocals.

All in all The Hell You Seek E.P is filled with great tracks that will have you nodding along to the beats. Experimenting with their sound is how musicians find that element that distinguishes them among a crowd of metal bands and you can really see how Wretchedpain is playing with different elements in this E.P. I'm excited to see what Wretchedpain has in store for us with their next full length album.