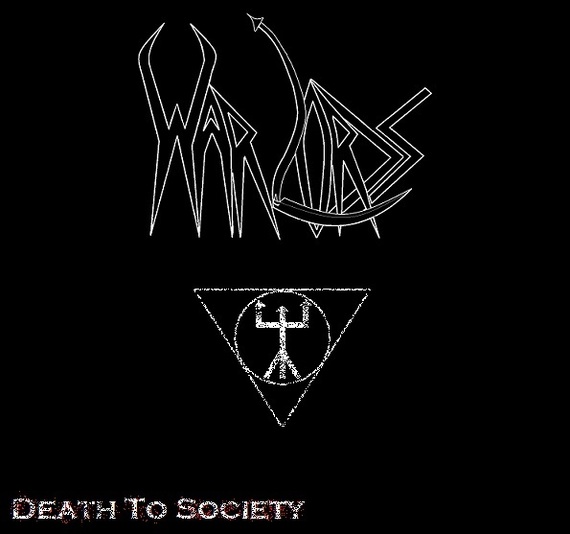 On their demo “Death to Society,” Warlords have a noticeably distorted, low-fi sound much like the demos by legendary black metal bands in their early days.  That isn’t a flaw though; a huge part of the appeal of Black Metal is the raw, low-quality sound, which emphasizes the gritty atmosphere and supports the genre’s underground sentiments.  Although it has low quality sound, the musicianship, song structures and guitar work still show through, which is great in comparison with some Black Metal demos where the sound quality is so distorted that the guitars sound like static. “Death To Society” features the following three songs:

In "Death to society", Warlords display an appropriate mix of slow, doom-influenced segments before seamlessly kicking into wickedly fast sections featuring blistering guitar work and pounding drum beats. This combination is never jarring and always displays great musical variation. Much of the sound present on this demo is reminiscent of Black Metal’s second wave bands such as Mayhem, Darkthrone and Emperor.  With that said, other influences show up on these songs as well. Whether or not it was intentional, the atmospheric intro of “Death To Society,” with its deep, droning chords and distorted vocals, brought Sunn O))) to mind.

“Death to Society” is an excellent opening song and features the elements I enjoy most about Black Metal: fast paced chilling riffs, raspy screeched vocals and appropriately slow, doomy sections. “Bloodstained Steel” has a great main riff, suitable to old-school extreme metal bands and is even reminiscent of Mercyful Fate.  Because of the excellent main riff, this song has a surprising melody to it at some points, at other times the song is very fast, featuring the high pitched notes and tremolo picking as heard on “Death To Society.” As for “Ragnarok,” this song is mostly an instrumental aside from some brief vocals. It features a constant and somewhat repetitive guitar riff throughout the song, but still displays some interesting scale progressions and enough impressive guitar work to hold your attention, especially in the last minute of the song.

My main complaint is that some of the sound mixing could have been better. While “Bloodstained Steel” has a good sound mix, it also plays at a noticeably lower volume than the other tracks and there are some short sections of “Death to Society” and “Ragnarok” where certain instruments sound a bit overblown, as if recorded at too high a volume. This isn’t a complaint about the band’s raw sound, which fits perfectly with the underground sentiments of Black Metal, but rather about the volume and mixing. At the same time, this is a demo recording and having less-than-the-best sound mixing on a demo is not uncommon, so it’s forgivable and didn’t ruin the songs for me. The only other issue I have is that the first two songs seemed to cut off short at the end, as if there were a few seconds left on the recording.  This is nit-picking of course, but I liked the songs so much that hearing them end early is jarring.

In only three songs, Warlords display an effectively cold, atmospheric sound and play with enough musical skill and variation to demand respect from the genre’s hardcore fan base. The demo alone is a great listen and, according to the band, they are currently writing and releasing new material. I hope Warlords will release a full-length album sometime soon. This band is highly recommended to black metal fans that enjoy raw, unpolished Black Metal that stays true to its origins.