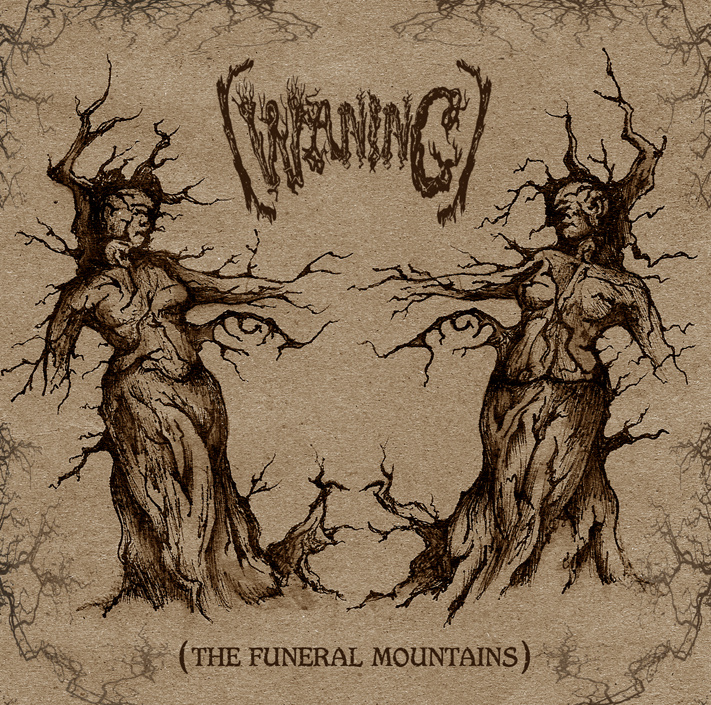 Out of the warm and sunny beaches of Sacramento, California, comes a four-piece doom metal band called (Waning). Just released last month, their album, The Funeral Mountains gave me a lovely introduction to what they’re all about.

Besides, it was also the perfect time due to the gray and rainy day that was had while listening to this album, adding to the atmosphere around me already.

The vibe of the album fit the atmosphere that was around me so well because it was a gray and rainy day outside when I was listening to the album.

The cover art is interesting and very nature oriented. You can tell that (Waning) are very involved with celestial beings, nature, and the astral world.

When listening to their first song, “Prologue (Avarice)” the vocals surprised me, because they sounded very black metal-ish in the first two minutes. The track then softens down, while sounds of Lustre-like instrumentals played in the background.

It continues gracefully, and it lasts over seven minutes. A feeling of exhilaration and anticipation in the first song makes for a great beginning. Near the end, the black metal vocals come back to haunt your ears.

The following track “The Silver Woman” contains soft instrumentals, with Gothic vocals echoing in the background. The song itself calmed me right down.

After that track comes “Seismic,” bringing back heavier instrumentals. Once again calming, but with a different feel to it.

Overall a great album that keeps you balanced and at ease. I found myself enjoying Gothic music all over again while listening to this album. Very doom-y, extremely ambient, with hints of black metal here and there.