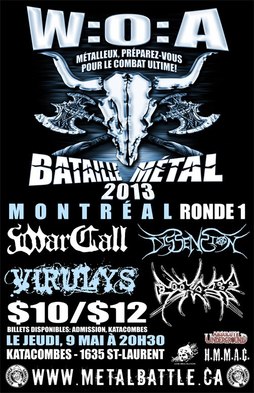 Wacken Metal Battle Canada is proud to announce that Dissension have moved forward from their qualifying round and will be performing in the Montreal semi final taking place on June 7th at Katcombes to battle for a spot in the national finals in Toronto on June 22nd at the Opera House.

The next qualifying rounds are scheduled for Wednesday, May 15th with Round 2 of qualifying in Montreal at Katcombes with Trainwreck Architect, Venomenon, Demise of The Crown, Fallstaf and Round 3 of qualifying in Toronto at the Hard Luck Bar with Warmachine, Mastery, The Unborn Dead, Cecile Monique, Laugh At The Fakes.

About: The world’s most prestigious metal festival, Wacken Open Air, known for its elite line up of the globe’s best metal bands is bringing the largest metal contest on the planet Wacken Metal Battle to Canada. Recruiting 39 independent Canadian bands after hundreds of submissions to compete, Wacken Metal Battle Canada will select one true champion to represent the nation with highest honour at this summer’s 2013 edition of Wacken Open Air Festival in Wacken, Germany.

Being held in Toronto, ON and Montreal, QC during the months of May and June, Canadian metal bands from across the country will challenge one another to join a list of Canadian heavyweights such as Voivod, Exciter, Razor, Annihilator, Anvil, Kataklysm, Cryptopsy, 3 Inches of Bloods, Despised Icon and Danko Jones who have performed at the festival in years past.

The Wacken Metal Battle Canada line up for the qualifying rounds in Toronto & Montreal is as follows and will be judged by a panel of local music industry representatives.