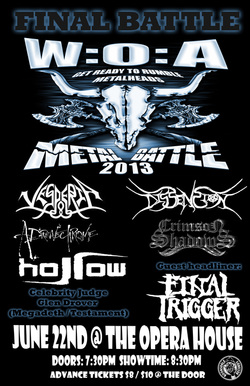 One Canadian band to rule them all!

"We've got ourselves a truly impressive line-up of finalists, which depicts what is happening in Canadian metal today.  Be prepared for an incredible showcase of talent and superb metal. It shall be a real battle to the very end... with a wicked soundtrack!"

After after hundreds of submissions, 39 independent bands were selected to compete in Toronto and Montreal this spring with the final five now set to battle it out for one to rule them all and perform at this year's Wacken Open Air in Germany from August 1st- 3rd. The winner of this final will join a list of Canadian bands such as Voivod, Exciter, Razor, Annihilator, Anvil, Kataklysm, Cryptopsy, 3 Inches of Bloods, Despised Icon and Danko Jones whom have performed at the festival in years past.

All bands were judged by a panel of local music industry representatives.