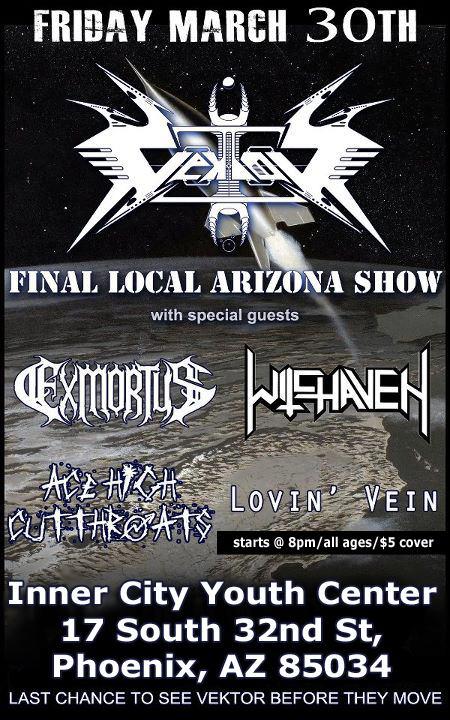 The underground Arizona show was at the Phoenix Inner City Youth Center. The venue was pretty hard to find, you had to enter through the back of alley to get in. Once inside it was a very home like place; a bit messy, but hey, it’s mainly a punk venue. The inside was very spacious. It had plenty of room for moshing, and had some beat up couches and chairs along the graffitied walls. This place must have been where somebody or a group of people lived. There were mattresses on top of a couple of cabinets, and inside the bathroom there was some toothpaste and shaving cream. The show was supposed to start at 8:30 according to the flyer, but it ended up starting around 10 or 10:30. I was originally coming for Vektor, (their farewell Arizona show since they were moving to the east coast), and Exmortus, but I happened to find another band that kicked some ass too!

The first band up was a local punk band called “Lovin’ Vein”. I don’t know what was up, but it appeared to me that there was something wrong with the sound system. You could hear the drums and guitar of course, but you couldn’t hear the vocals at all. Punk music isn’t very impressive if you can’t even hear the singer! There was pretty much no movement in the audience at all. After about 20 minutes their set was over. I’m sure they would have been alright, but the sound system was just terrible.

Up next was another local punk band called “Ace High Cutthroats”. These guys were a lot better! I’m guessing they did a proper sound check. Within the 2nd song the crowd started to go crazy in a circle pit. At the end of the song the singer was saying that his microphone was shocking him a bit. This is when I found out that this place defiantly didn’t have that great of a sound system. In their 3rd song the circuit blew out, and the sound was out for about 10 minutes. The next song that they played was “Ace High (Ride or Die)”, which was a really fun song to see them play live. (I Will put a link at the end). Somewhere in their 5th song I got hit in the nose with somebody’s head and left me with a pretty bad bloody nose. I missed out on the rest of their set since I was occupied on making sure my nose wasn’t broken and cleaning off the blood from my face and the bathroom sink.

By the time I was done with that Witchaven was setting up. Since I’m not a big fan them I decided to take a step outside and get some fresh air. Outside I found the guys from another local Arizona band called “Warhead” and I talked to them about some metal. (I highly recommend you check them out! I’ll put a link of them too at the end) by the time I was done talking with them, some people starting coming out of the place. Witchaven’s set was already over. A friend of mine said they got cut short because it took them too long to set up. Within a couple of minutes I heard Exmortus from outside, so I decided to go back in.

I went back in and Exmortus was finishing up their first song. The crowd was going absolutely insane. They began to play their second song. Next they played “War Gods”;right when you thought couldn’t audience get any crazier than it already was. They wanted to see the crowd split in half for the wall of death. “When I say “HAIL TO THE GODS” I want these two sides collide!!” When the time came the two sides smashed into each other and chaos erupted! The two sides became one and evolved into an open pit, which soon evolved into another circle pit. IT WAS MADNESS!!! Somewhere else in their set, they played “Kneel Before the Steel” This song shows the singers capability. He is able to hit the high notes like Rob Halford and also do some mean thrash metal vocals. They also played their Yngwie Malmsteen inspired instrumental “Axes of War” and JUST KILLED it!! That has got to be one of my favorite metal instrumentals of all time! I would even say that they did it better than off of their album, it was just that good. It’s impossible to describe in words how great it was. I didn’t bring my camera with me, so I was unable to record it. (I’ll put a link at the bottom) They closed with “Triumph by Fire” and was defiantly a wise choice! Not one bad song on the setlist!

Vektor hit the stage with the first song off of their “Outer Isolation” album, “Cosmic Cortex”. They really do an excellent job live. David DiSanto (Lead Singer) is able to hit the most unearthly banshee screams ever, EVEN live. What I liked about Vektor (as well as Exmortus) is that everything that they can do on their album, they can do right in front of you, and they pull some crazy things off on their albums! They also played “Tetrastructural Minds” which is one of my favorites off of “Outer Isolation”. It starts out with an insanely speeding riff and then a spine chilling banshee scream. It is defiantly a song to check out and they perform it terrific live! They soon moved over to their first album “Black Future” and played “D.N.A.” and then “Black Future” They played many other songs too, but these are the ones that stood out to me the most. Just like Exmortus, there was not a SINGLE bad song on the setlist!