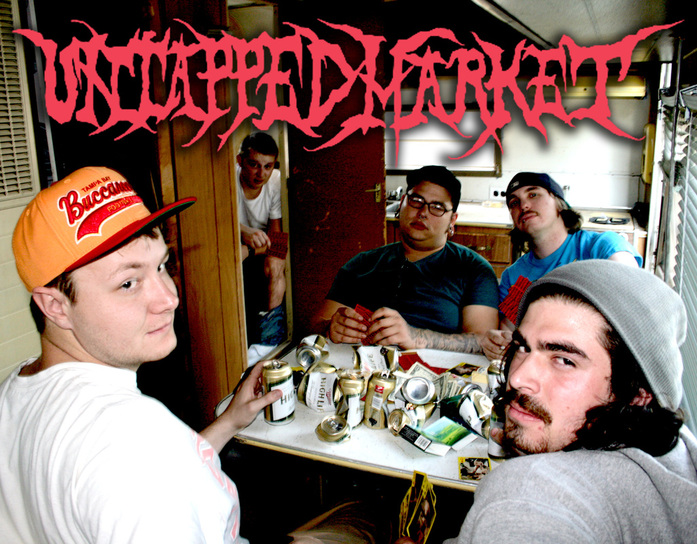 Starting at the most recent accomplishment in this band’s career we arrive at Untapped Market’s 2011 album titled “A Profits Rising”. The album’s release on August 13th of this year came after a long wait and lineup changes that would form the now solid brotherhood of UM, the most recent addition to which was Chris Benton (guitar) who was added prior to the album’s release date and in place of former member Justin Hiltzman. The album features 13 songs, including the title named song “A Profits Rising” as well as “An Unheard Apology”, “Funny, Not Funny”, “Kingdom Of Conscience”, “Descendants”, and 8 other equally energizing tracks.

“Funny, Not Funny”, although just a brief 30 second preview on CDbaby, (links below), is intense from the first few seconds and left me wanting more. The feature song “A Profits Rising” is four minutes of mosh-worthy beats that replayed several times on my computer before moving on to the next song. This album has an intense energy about it that beckons a little head banging. “A Profits Rising” is available for free download from the band’s Facebook page, (links below), and I highly recommend purchasing the album on CDbaby, or better yet, go see the band live!

The band has its fair share of ups and downs previous to this release, beginning in 2006 at the band’s conception with member Brandon Buckner and later in 2008 with Philly Zimmerman, and Stan Smith, all working deligently to establish the now familiar Kansas Metal band Untapped Market. The group worked tirelessly to put out their debut 5 song EP titled “No Jealousy in the Grave” which was released a year later in 2009. The EP gained them immediate popularity in the local metal scene and would pave the way for their newest release and a number of fans and experiences worth the journey. Although from the way this band has exploded onto the scene and the momentum in every song I have a good feeling their journey is far from over. Expect to hear great things from these guys in the coming years.