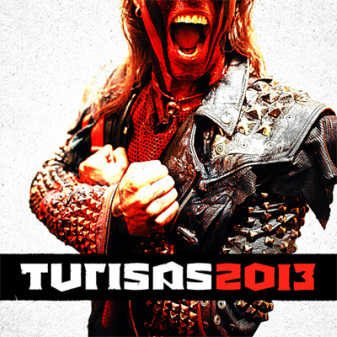 The Finnish Legion has yet again taken our ears and minds to battle with a new release on September 3rd in North America under the title Turisas2013. And right from the very first song it’s hard not to think about banners and flags flying high against the horizon, in other words, the Turisas’ stamp was placed right in front of your face too see.

Using the same instrumentations this band has made us expect from them, they have laid out another album worthy of any Broadway stage due to the theatricality they always manage to imprint in their work. This theatrical element is what really makes Turisas stand out amongst the sea of folk metal. The album was recorded mostly between vocalist Mathias Nygård and guitarist Jussi Wickström, the masterminds behind that unique Turisas sound. Amongst the new details found in this album is the use of acoustic guitars over well developed melodies through some parts of the second track “Ten More Miles.” The use of a synth solo in their first single off the album entitled “For Your Own Good” was also new and definitely interesting experience in the Turisas experience.

Another aspect that jumps right out of the songs is the excellent vocal technique of Mathias Nygård to not just hit the necessary notes, but also to put so many different expressions and feelings into the words. But that is something Turisas fans have come to expect. Speaking of words and voices, the choir used for Turisas 2013 is the cleanest they have offered in any of their releases. Either the recording equipment used or the singers have vastly improved from their previous albums. You can actually distinguish every voice which adds depth to the songs.

The album is full of dreamlike melodies, mostly delivered by the vocals and the arrangements which range from the gypsy sounding fiddle to hard rock, folk, heavy metal, and polka. And of course we can’t forget the constant sound of Turisas´ own genre: Battle Metal. At some point, like in the track “Run Bhang-Eater, Run!” we even get what seems like smooth jazz mix with the sounds more fitting for a soft core porno. Turisas is definitely experimenting with the old and new in this album. They reference famous Turisas songs like in “No Good Story Ever Starts With Drinking Tea” where they have chipmunk voices singing the chorus of “March of the Varangian Guard” from Stand Up and Fight (2011). Although I have to admit that the album is not as heavy as I had wrongly anticipated it was going to be, it’s still a very rich musical speech and exposition of many talents from this Nordic horde.

In conclusion, if you are a Turisas fan you will love this album, and if you are expecting to hear some very heavy songs on the line of “Cursed by Iron” from their past album The Varangian Way (2007) you might be a little disappointed. If you are looking for heavy songs check out “Greek Fire” which has the heaviest riff in the whole album. In the end Turisas13 has good melodies and interesting musical ideas that will transport you to the Turisas world.