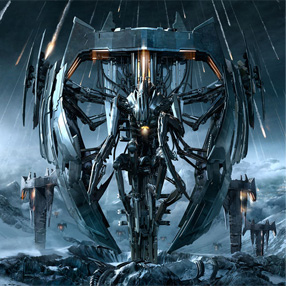 Brave This Storm
Vengeance Falls
Strife
No Way To Heal
To Believe
At The End Of This War
Through Blood & Dirt & Bone
Villainy Thrives
Incineration: The Broken World
Wake (The End Is Nigh)
No Hope For The Human Race (Bonus Track)
As I Am Exploding (Bonus Track)
Skulls...We Are 138 (Misfits Cover) (Bonus Track) 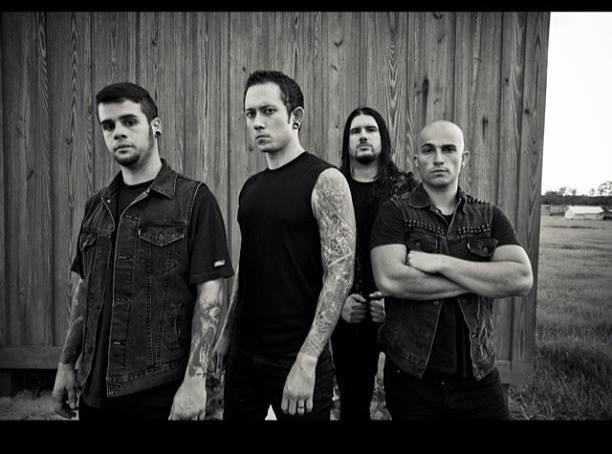 Trivium is a band that is definitely not afraid to take chances. They were one of the first bands with screaming vocals that I embraced. I started listening to them around the time The Crusade came out, and have been a huge fan ever since. The classic metal sound with a 21st century twist is one of the key elements about Trivium that has helped them garner the huge fanbase they have today, and has coined Trivium as one of this generation's most important and innovative bands. Another interesting thing about Trivium is that they definitely know how to keep it fresh with every album having a slightly different twist to the previous, while still maintaining the heaviness and every major ingredient across all previous records that fans have come to love. It's a little hard to classify Trivium as just one genre of metal, as you hear elements of metalcore, thrash metal, progressive metal, classic metal, groove metal and even death metal in their music.

The band's new album Vengeance Falls has been one of this year's most anticipated releases. The band posted pictures in the studio, with David Draiman of Disturbed and Device also seen in the pictures, which sparked speculation that he would be featured on the album, but was later revealed that he was in fact the album's producer. The revelation also got Trivium fans scratching their heads a bit. Many fans have went as far as calling the band's decision to work with Draiman a controversial choice.

The album contains every element from the past Trivium records such as the simpler heavy and melodic style from In Waves and Ember To Inferno on tracks like "Brave This Storm" and "Strife", the progressive and technical style from Shogun on tracks like "Incineration: The Broken World" and "Wake (The End Is Nigh)", the super heavy style from Ascendancy on tracks like "Through Blood & Dirt & Bone" and the title track, and some of the straight forward thrash from The Crusade on tracks like "No Way To Heal" and "At The End Of This War". Trivium is also one of the few bands that incorporate bass solos in some songs, where Paolo Gregoletto really gets to show off his lead soloing skills on the bass, which seems like a rarity to metal, and he showcases it on "Incineration: The Broken World".

"No Way To Heal" is one of the most technical songs on the album. The track is also drummer Nick Augusto's best recorded drum performance ever, where the fill leading into the bridge is earth-shattering, and lead guitarist Corey Beaulieu offers up a shredfest as always. The guitar tandem of Matt Heafy and Corey Beaulieu is something to be reckoned with, and it's easy to distinguish who's playing what solo.

One thing about the album that didn't make a lot of Trivium fans happy were Matt's vocals on certain songs where they sounded identical to David Draiman, being as he helped create vocal melodies for the album. The Draiman-esque vocals are easily identifiable in the verses on "Brave This Storm" and "To Believe". It does have the tendency to throw some people off, but Draiman's contribution to the melodies ended on a positive note as well, where he helped create vocals hooks and harmonies that are enough to make heads bang and give the listener chills. A good example would be the track "Villainy Thrives". The chorus to "At The End Of This War" stands out as one of the most monumental vocal moments on the album, and the same goes for the title track's soaring victorious sounding chorus.

The special edition contains three bonus tracks that are just as essential as the standard tracks. “No Hope For The Human Race" is one of the tracks where progression of each riff is noticeable, which gives the song the more technical edge. "As I Am Exploding" is sure to please fans of Ascendancy, with the intro reminiscent of the track "Rain", as well as the old-school thrash that pummels through the song making it impossible not to headbang. Trivium is also known for their amazing covers. This album features a cover of the Misfits classic "Skulls...We Are 138".

While Vengeance Falls may not measure up to the majesty of previous albums like Shogun and Ascendancy, it's an album that is sure to keep Trivium fans satisfied. I picked up Vengeance Falls the day of its release and I'm still cranking it on my stereo. It is safe to know that Trivium is a band that will stand the test of time and in 10 years from now or sooner, will be as influential as Metallica, Megadeth, Slayer, Iron Maiden and Black Sabbath, and so many other bands that have been to them.

Highs: Vengeance Falls, No Way To Heal, At The End Of This War, Through Blood & Dirt & Bone, Villainy Thrives, Incineration, No Hope For The Human Race and As I Am Exploding are all excellent stand-outs.

Lows: Some of the Disturbed-ish vocal moments