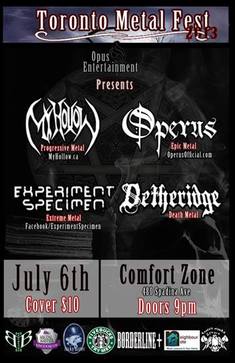 It is with my utmost pleasure that I was both able to attend this show and to write a review for it. It is not often that a show dares to even exist, let alone call itself a Fest, between two massive media juggernauts like Vans Warped Tour and Rockstar Mayhem. Still,Toronto Metal Fest dared to overcome this obvious obstacle – and we here at Metal Master Kingdom hopped right on the bandwagon.

Toronto Metal Fest, right from the beginning, managed to bring a collection of firsts for us here on the Ontario side of MMK (which included our esteemed founder Ingrid Newton and prized photographer Navneet Johal). Not only was the MMK logo featured on the TMF poster but our own Oscar Rangel and Kirsti Heitz were active members of the show – Oscar heading Operus and Kirsti tending to the door (which later served as a base for us all) of Toronto’s Comfort Zone. The show was an all-round perfect setup for the underdogs in both Canadian Metal and music journalism.

The first band to play was Detheridge, a death metal trio consisting of a seven string guitar, drums, a singer, and some pretty deadly boots. Their performance started, for me, nearly out of nowhere – officially breaking in TMF13's theme of brutality and sending me rushing to the Comfort Zone's stage. In fact, Detheridge may have, at least vocally, been the most ‘brutal’ of the featured performances. Sadly, I feel that –even though seven string trios hold a place in my heart- that Detheridge may have suffered a tad from a minor lack of variety.
However, the group retained purity (as in minimal effects and no slash genre-isms) which I feel is something to be highly appreciated.

Experiment Specimen was the next up, an Extreme metal band bordering on Technical. Though they didn’t quite possess Detheridge’s prized boots, the band’s front man certainly was able to get a few chuckles from the crowd. What I liked about Experiment Specimen’s music was that they didn’t necessarily need all their songs to be extremely … well, extreme…  the band seemed to enjoy playing what they did and played it well. My only complaint was the fault, oddly enough, of the crowd. Midway through their performance the crowd of the Comfort Zone requested that the vocals be louder, however, I personally felt this made the sound slightly uneven and the higher notes quickly began to eat at my ears. Though, since the crowd had been thoroughly appeased, we were all privy to a few extra songs.

Standing out in the lineup was MMK’s own Oscar Rangel with his project: Operus. Before the show had begun I was privy to the fact that Operus had sadly not been able to bring someone along to play bass – diminishing Oscar’s act to a trio. A stand in was apparently supposed to be present but somehow that didn’t happen. But Operus did not suffer in the slightest; their Symphonic/Melodic sort of edge further separated them from the more extreme elements of Detheridge and Experiment Specimen – though their music was certainly heavy enough to fit snug in with the rest as well. The lack of bass did not affect the intensity of the music, especially considering the band was all for crowd inclusion – with the guitar player getting off the stage and playing among us all. As well-furthering the perseverance of Operus- part way through the performance one of the drums triggers went out – but the band adapted and completed their set gracefully.

Finally, a personal favorite of mine had been able to attend: My Hollow – a Progressive Metal band that had played among the likes of Threat Signal, The Agonist, and Cryptopsy. Some might feel my fandom towards this group might give them some unjust advantage but most everyone attending could certainly agree that My Hollow certainly deserved to be headliner. As with the first time I'd had the pleasure of seeing this group – the entire room was absorbed into their music. Their performance was intense and extremely engaging with the band accepting all sorts of crowd inclusion. As for the new demos that My Hollow performed, I couldn't be more pleased to say that they take everything done on their Cold Dark Days EP to the next level. I had been invited to stay longer, though personal circumstances prevented me from doing so (next time!)
.
Toronto Metal Fest certainly wasn't anything to underestimate, bringing forth four acts almost criminally lacking widespread attention. Though Vans Warped Tour and Rockstar Mayhem lied beforehand and in the future –Toronto Metal Fest made itself a worthy staple. If kept up, no doubt TMF might actually become something much more regular and capable of gaining a large stance in the underground metal scene.
Metal Master Kingdom's Album/Song review & Photo Request submission form here. ​​