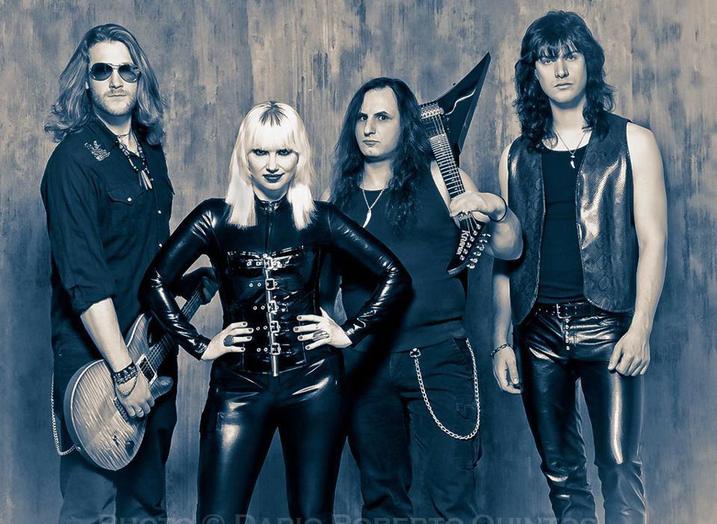 I had the pleasure of meeting the demure Miss Mila and the guitarist for Tiger Star, Cam Carnage, back in January at a metal show at The Bovine in Toronto. This was my introduction to the the highly talented vocalist and the band Tiger Star.

Back in 2009, Mila and Cam formed the band Tiger Star and proceeded to write material that essentially is a fusion of rock and metal, with elements of pop that soften their sound only ever so slightly.

The band has played shows with acts such as Thor, Michael Monroe, Famous Underground, Faster Pussycat, Cauldron, Kobra and the Lotus, Sister Sin, Genitorturors, and many more artists.

The song titled “Lolita” has climbed the charts and remained there at Indie Love Radio in Canada, an internet-based radio station. This same song also was featured in the grindhouse-style horror film Black Eve.

This band formation had very clear direction with their sound and songwriting! They were determined to not follow the same path of so many other bands, but rather, set themselves apart by showcasing the vocal talents of Mila! This young lady encapsulates a modern version of strong female personnas from bygone ages, like Marilyn Monroe for example. For some, Mila may be the only reason to see the band play, but the audience will soon realize that the entire band has the musical skills to back up the strong vocal performance evident in their tunes.

Now that I have listened to the debut CD, which is self titled, I can share my impressions of the tunes with you. In order are the tunes listed here:

“Running Into the Night” offers a great intro to the song, and the strong vocals are perfectly harmonized with the guitars.

“Lolita” is a sexy number with more high hat action from the drums which emphasizes the busy lyrics. The high pitched wail from Mila tingles the spine!

“White Tiger” will be etched in your mind from the first listen. The gallop style rhythm combined with vocals are akin to a modern Betty Boop and makes this song unmistakable and unforgettable.

“Obey the Fire” is a bit more subdued but has a great break near the middle and redefines the tune. The ending has clear ties to that Iron Maiden sound we all know and love.

“Ur takin' My Heart” starts with beautiful guitar notes that lends to the idea of a ballad. I hear tones of Guns 'N Roses here.

“Sweet Heaven” is by far the fastest track on the album. The vocal style in this song is different. I hear the high octaves, and also yipping and deep, sexy exhales from Mila! Like a passionate release of energy.

“On My Own” sounds more forlorn, lonely. This song truly resonates a journey of finding oneself, to be allowed to be yourself, and not what others expect you to be. As the tune picks up a faster beat, this could be like the self discovery of the individual, of true self love.

“Angels Coming Down” has more a pop song feel. Still heavier than most modern day pop songs, but I think this song would suit the air waves.

If you are looking for an album that contains smart, sexy musicianship and vocals, and reflects the classic music styles of the 80's then you have come to the right band!

As we wait for the 2nd album to be released, I want to let you know where to purchase the current material:
http://itunes.apple.com/gb/album/tiger-star/id510482049
http://www.tigerstarmusic.com/