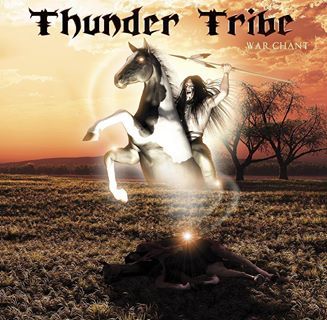 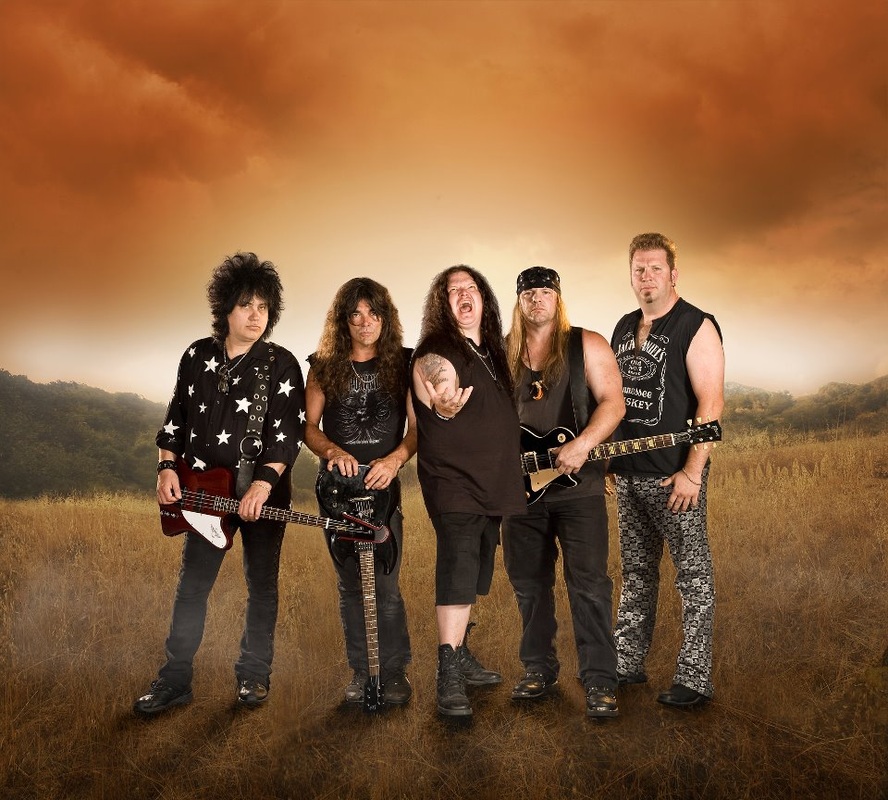 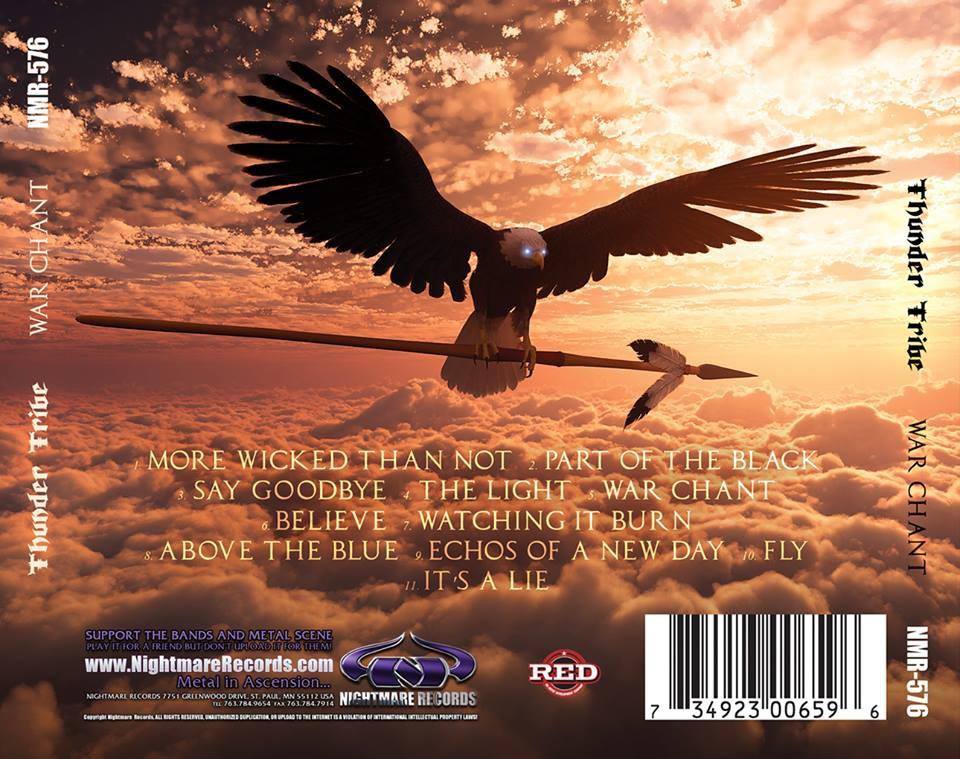 Thunder Tribe is a Heavy Metal/Progressive Hard Rock band comprised of five veteran musicians who understand the feeling and the power of Melodic Metal Music." That's taken straight from their facebook page and this is a good starting point for my review of their new album, War Chant.

I was excited to finally receive a download of this album from Michael Duncan for review. I've had it for awhile now and I wrote a review of it soon after listening to the music a few times. One of the things I find when I write is that after going back and reading my reviews a couple months after the publishing of them, I begin second guessing myself and realize I could have done a better job with my reviews. Fortunately I've had these tunes long enough that I have this opportunity to do what I usually would like; which is have a second chance to write about an album. So this is my newer and improved review of War Chant. With the upcoming release of War Chant, most of the songs have been placed in a new order which warranted another listen or two, well, five, because the order of the songs certainly gave me new perspective on the album as a whole.

I was fortunate to attend Thunder Tribe's most recent live show just a few nights ago. As always the band was energized and totally invigorated the crowd of fans. This night was a special night though. Lead vocalist, Michael Duncan announced, (at the beginning of their set), that this show would be the last time Thunder Tribe would perform cover songs. From now on they would perform their original music. This could only mean one thing; they are ready to release War Chant soon!

The album kicks off with two songs, both of which could be "A side" songs without a doubt. "More Wicked Than Not" begins with an intro that is slightly reminiscent of a tune played later on the album. It's a driving, vigorous song with Ronnie Duncan and Rick Sargent on guitars alternating between choppy, crunching and wailing melodies. Tom Dawson's bass and Chad Osborne's drums compliment these changes with their pronounced changes in tempo. And all is wrapped tightly within the exquisite classic heavy metal vocals of Michael Duncan.

Second on the line up is "Part of the Black". This song I've heard Thunder Tribe performed numerous times at their shows. It's my favorite jam by them and is so packed full of riffs that it makes my metal heart nearly burst with ecstasy. This song begins with a deliberate, slow beat topped off with a lamenting guitar riff. And like the previous song, but not quite as conspicuous, this song has variegated changes in tempo. Throughout the song the guitars provide me with images of dripping tears. If you ever have the opportunity to hear this veteran band of Metal masters live than I believe the performance of this song will blow your mind.

Slowing things down, "Say Goodbye" is a song that seems to have its flavor rooted in later Beatles tunes once they experienced, well, Ravi Shankar. Yet it's fresh sounding with a dash of classic Metal ballad vocals and melody and has an epic sound of Power Metal. Oh, yeah, the song ends abruptly which is quite fitting in my mind. I hate goodbyes. I'd rather just end it all and say goodbye with no fuss and no muss.

Next is "The Light" which continues with the soft ballad sound, but builds slowly up to a Power verse followed by a very sweet interlude of guitars, (I am not exaggerating when I say I am reminded of Pink Floyd here), and then the drums lead into another crescendo of Power Metal vocals. Up and down it all goes, until it finally ends calmly. I could listen to these sweet guitars all night and even as I enter into the light.

The pace picks up with the title song, "War Chant". "I can feel the pain from your arrow. I can taste the fear that we gave you." Yes, it's a song with Native American flavor and lyrics. It's a song written by and for "wounded warriors". Not a ballad, but more of a lament. A Metal lament.

Kicking it up even harder is "Believe" with Kickin' drums and a speed Metal intro. Another song with the fantastic tenor vocals of Michael Duncan offset with choruses of rougher sounding vocals. A great example of "call and respond" style of vocalizing. Squealing guitars, bass and drum driven. Once again changing tempos to keeps it all interesting. It's another Thunder Tribe song that reminds me of something...something...oh, yeah! King Diamond! Then the end..."Lying, thievery, dishonor, betray what America is...expendable lives, living today, what a small price to pay!"

Now then, "moving right along" as the lyrics say, with "Watching It Burn". Catchy, my head is rocking now. Hell, my old body wants to dance to this tune! You know, this song reminds me of something...not quite sure what tune it is. That rolling, bouncing bass line is addictive as are those harmonizing guitar riffs. Those drums! They pound out a satisfying end to the song.

The 8th track came as quite a pleasant surprise to me when I took my first listen to War Chant. At first I wondered why "Above the Blue" was included on the release. It's not a Metal song. It's acoustic and it's deliciously bluesy. Perhaps it was included to showcase the tremendously versatile vocal abilities of Michael Duncan. No matter, it's a great break for this Metal album. The vocals are a growly treat with sweet backup harmonies and remind me of a couple different things. First, of the sultry tune, "Black Velvet" by Alana Myles. It's that cool and great to listen to on a hot, humid summer afternoon. Second, I am reminded of many Metal tunes that trade off rough vocals with clear vocals. "Above the Blue" does that, but with a fine twist. Michael Duncan's rough bluesy growls and his clearer, more operatic tenor vocals for which he is famous. I chatted with Ronnie Duncan about this song the other night and he told me this song almost didn't make the cut for this album. I am glad somebody was looking out for my listening pleasure and made the decision to include it.

The first time I listened to this album the first track was "Echoes of a New Day". For an intro song, it began with a melody that sounded like an outro to me. I suppose that might be why it was pushed further back in the lineup. It is, after all, about leaving the past behind and enjoying the feeling of starting over again. At least that is how I interpret it. And so I felt the song was saying goodbye to the past, moved on to a more intro sounding melody and then kicked off into the heart of the song, changing tempos and ambiances.

"Fly" appears to have been produced to capture the sound of a live Thunder Tribe performance. There's a thicker quality to the song that I enjoy when standing right in front of a stage and having the full effect of the amplifiers pounding my face and shattering my eardrums. The guitars sound of Mid-Eastern flavored drones and tortured squeals seem to lift my spirit and I fly and soar in the Metal heavens; swirling faster and faster until I'm set back on my feet once again. It's a pity it lasts just under four minutes.

Last up is "It's a Lie". It's Metal, yeah! It also has a flavor of late 60's Psychedelia as well as 70's Rock. Perhaps when you listen to it you will understand what I just can't seem to put into words. But I'll try. That bass! That catchy duality of guitars and springiness on the melody! And always, the bass and drums, keeping it all together, not overpowering, but properly prominent for sure.

Thunder Tribe has to be one of the finest kickass Power Metal bands you might ever hear. And if you've never heard them or of them, and you know me, then you haven't been paying attention.

Ha ha! I remember, very well, some guy once told me that he thought Michael Duncan was "just a screamer". Obviously this guy was jealous and his ego got in the way of his ears. Michael Duncan's vocals are quite a match for the vocals of Rob Halford and Dio, yet versatile enough for rough and growling when necessary and desired.

Thunder Tribe are true craftsmen of Metal. They know music, they know their instruments, and none of them rest upon past accolades. They continue to progress and most of all, they have a lot to say in their music and I doubt I will live to see the day when they quit creating Metal. iI's a passion some people are born with and never give up on. Thunder Tribe is helping us with "keeping metal alive today, for tomorrow" by keeping the metal sound fresh and never letting the genre stagnate and die.

Much Metal Love, Sisters and Brothers!