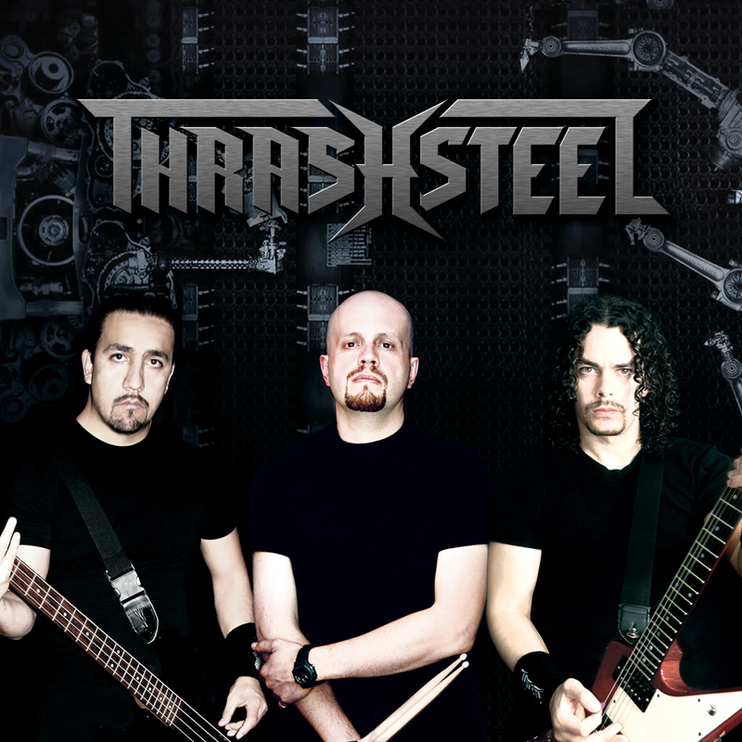 Thrashsteel, hailing from Mexico, have a sound that is fresh and modern, but remains true to the traditions of the 80s sound emphasized by the Thrash Metal Titans of the 80s. According to the band’s bio, their biggest influences are Metallica, Megadeth, Slayer and Pantera, but their sound is also highly reminiscent of Testament while the vocalist sings in the same tone as Paul Baloff, (Exodus). With that said they also display some progressive scales, a wide range of influences and bring something new to the table by experimenting with their sound. Surprisingly there are only three members of Thrashsteel and together they create a sound that is as thick and complex as hardest of the five member bands.

Rather than focusing on the standard metal clichés such as Satanism, death, partying, sex and cartoonish violence, Thrashsteel take their lyrics more seriously by writing about “atheism, politics, ignorance and mass manipulation.” Just as Metallica and Megadeth wrote about serious social issues in the mid to late 80s, Thrashsteel focus their lyrics on such grounded, real world themes as well.

Another very refreshing aspect of Thrashsteel’s music is the emphasis on a strong bass line. Thrash Metal has always been a very bass heavy genre and on many of Thrashsteel’s songs, their bass player is given starring moments. “Deus Ex Machina” in particular features some of his best bass work during a slowed mid section of the song. The other two band members provide excellent musicianship as well, with guitar work reminiscent of legends such as Dimebag Darrel and Andy Laroque, while the pounding drums always keep the perfect beat and rhythm.

Thrashsteel have six songs available on their Reverb Nation page. They are as follows:

The first song, “Stained With Blood,” has a great rhythm, especially in the opening. The guitar solos and riffs at the end are reminiscent of Andy Laroque’s neo-classical thrash instrumentals. The second song “Big Brother” opens with a riff reminiscent of Dimebag Darrells guitar work from Pantera’s “Cowboys From Hell” era. As indicated in the title, “Big Brother” has lyrics referencing an Orwellian, totalitarian society as depicted in the novel 1984.

The third song, “Deus Ex Machina,” features some of the band’s most impressive musicianship and is one of their best songs they have played as of yet. The song opens with a slower, chugging pace before kicking into a perfectly fast tempo that fans of Testament will love. The middle section slows down and in this section there is some stunning bass playing as I mentioned earlier. This song displays the band’s widest range of sound and tempos, resulting in my favorite song by Thrashsteel.

“Thoughtcrime” emphasizes the use of bass as well by starting out with just a bass line. Despite having a strong bass opening and closing, good lyrics and a six minute run-time, this song is one of my lesser favorites on by Thrashsteel. It is very standard for a Thrash Metal song, never truly grabbed me the way their other songs did and falls flat as a result. “The False Witness” picks up the momentum again with a pounding beat, kickass rhythm section and a great solo. “Two Minutes Hate” is a great closing song that features a punching, chugging riff and chanted vocals, two staples of Thrash that are played to full effect on this song and make for a memorable closer to this album.

Although many of their songs and riffs will sound familiar to anyone who’s listened to the biggest Thrash Metal bands, Thrashsteel are definitely an inspired band who take their music seriously and know how to combine good progression and modern techniques with the classic ingredients that Thrash Metal was founded upon. Thrashsteel have developed a strong fan base, which is shown through their thousands of followers on social networking websites, and they definitely have what it takes to become a major player in the modern Thrash Metal scene. Through their socially aware lyrics, good production quality and constantly progressing instrumentals, Thrashsteel create an arresting sound that has already grabbed the attention of thousands and should continue to grow in time.