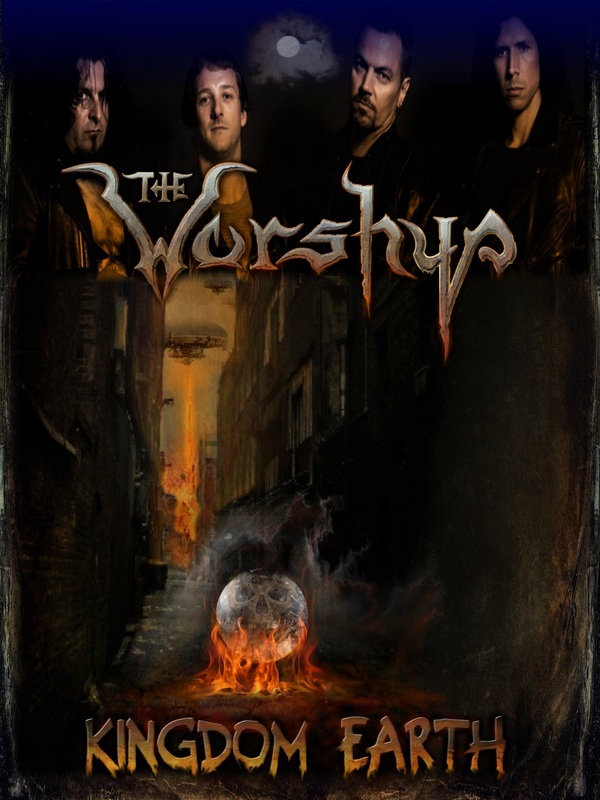 Living in Toronto has its advantages as many international acts come through this fair city. On the indie scene I am able to take in the local acts which is ever expanding and includes the band THE WORSHYP. I have yet to see the band perform live but that should not be a difficulty as they will be releasing an upcoming album titled EVIL ABOUNDS, produced by Glen Robinson, in March with a tour to support it soon after.

But that is not what I am reviewing today. I am listening to and writing about the previous release from January 2011 titled Kingdom Earth.

Let us start with a quote from the person who created the band in 2010: “The bands founder Marz Nova named the band The Worshyp as a salute to how heavy metal fans love, and almost worship, their music as if it were a religion. The name has no ties to any real organized religion.”* His bandmates on this recording, Mig and KK, are former members of band with Paul Di'Anno of Iron Maiden fame, and Thor, a Danish guitarist.

When one starts to listen to this compilation of tunes, you realizes that the musicical creation and theme of Kingdom Earth is different from todays standard of thrash, grind, or melodic metal. This album harkens back to the days of the 80's and late 70's. One can hear heavy metal with groove back beats, ever present rhythm, and tunes filled with sweet guitar riffs, and hooks of old school metal qaulity.

This music is not for the pit, rather for the head banger who can enjoy the basic ear and sprine tingling notes from a classic writing style.

Lets uncover some of the tunes within Kingdom Earth.

For one thing, it has a unique song opening. What are we hearing? It's like nothing I have ever heard before. This could be what space sounds like. This song creates imagery of space travel and once all the instruments are involved, the image changes to a menacing one. One can picture alien life forms and craft descending to earth to invade us with their markings, as if our world is being branded. There are no vocals for this arrangement, which adds to the mysterious element of what we imagine is happening according to the instrumental journey. Oh, wait, I did hear chatter from beings other than humans. Maybe you can figure out what they are saying.

Another great song opening. An intoxicating rhythm with well placed riffs are blended with a steady drum beat. Definitely written for headbangers! My question is who is watching us? Are we watching each other? Or watching for other life forms? Or are we being watched by alien beings who are tracking our every move? You decide.

The song intro is akin to marching. The tune is filled with a steady rhythm and ear pleasing guitar riffs. We are being told of ones account who is not going to let the others win, but rather, take this time to fight back. “It's time to kick ass” says it all. Seems to me that this is a fight for earth, but is it ours to defend, and do we think it is our planet? Maybe those who rightfully claim it are taking it back now?!

This song takes me south. I mean way down to the southern United States where we get the groove metal sound from. I'll have a beer, bartender! Best place to hear this tune, in a dark, beer swillin' bar filled with those who seek the night!

Bang! “It's just a game until you die!”. Some of the lyric content from this gang themed tune. This tune deals with life in the gang, and those who are unable to stop this way of life for many of our youth and loved ones. The hard hitting drum and bass beats are accompanied by crunching guitar rhythms that  interlaced with furious guitar riffs.

Overall, a funkier song, with a steady groove. We all have a mantra, but not of this nature!

With the first notes we are hit with a quick tempo, fast and frequent breaks, and the urge to get headbanging! “This violence is evil” gives us an indication of confrontation and unrest. If you are in a battle, you hope that your comrades will come back for you, and not leave you Left for Dead!! This tune includes all the guitar hooks and riffs, fast paced tempo changes that will help make it a true heavy metal classic in our modern days!

The entry to this song is more mellow compared to the other tunes. Guitar notes are full of emotion, with a feeling of despair and loneliness. The song lends to attempts of reigning in anger at a moment of defeat as one faces the inevitable final blow/act. With the refrain comes a faster pace to the song and really empasizes the title of the song, Never Afraid! The quickened beats, mixed with intricate riffs is much akin to emotions tied to fear and our willingness to face it.

The final song on the album starts immediately with a kick ass tempo, and smooth fluid like guitar strums. A perfect air guitar tune! We as a species are always looking for anwers to the unknown. We seek knowledge to the mysteries of our lives, and our world, and beyond. We pay those who claim to have those answers. What we need to ask is: Who holds the Spirit Keyz?

The artwork and overall concept of this album have me looking to the skies for unusual crafts and anything out of the ordinary. Are we being watched from the dark depths of the universe, or are there visitors already in place to make an attempt at eradicating life on earth? Don't overlook Kingdom Earth, it will help you to understand that we need to band together for our species, for our world, for the love of METAL!!