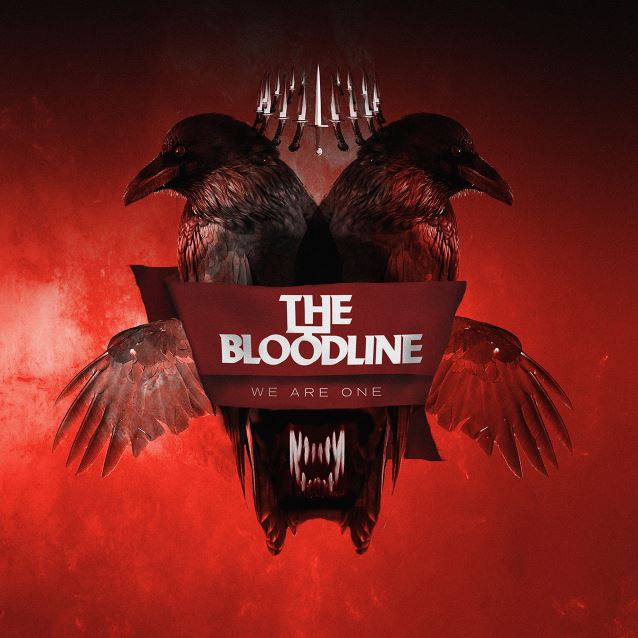 For those of you who have been a fan of The Bloodline since the Dirge Within days, you know exactly how much they care about delivering quality music.  In 2013, Travis Neal, Shaun Glass, Chuck Wepfer and Frankie Harchut decided to leave the history of Dirge Within behind and move forward as The Bloodline.

To get an idea of what was to come from The Bloodline, the band released a demo version of "The Blackout", followed soon after by a demo version of "Midnight", and now the full-length debut album and the first salvo of music from The Bloodline: We Are One is available.  Combining the aggression and technicality of metal with the melodic groove of hard rock has become the norm with numerous bands today, but it's a formula that never gets old.  We Are One contains a plethora of mesmerizing choruses, aggressive and melodic vocals, sledgehammer grooves, huge captivating hooks and a chunky dark rhythm tone.

Starting at the top is the haunting intro "The Bloodline", which is immediately followed by the pulverizing title track.  Guitarists Shaun Glass and Chuck Wepfer unleash crushing riffs of biblical proportions and deliciously catchy and dark harmonies.  Straightforward rockers include "Divided", "The Blackout", "Midnight" and "Poisonous", and Frankie Harchut's double-kick attack adds extra intensity to the songs.  As we work our way down the album, we get into some of the heavier tracks like "Destroyer" and "Becoming The Disease".  The throttle is pulled back on "Bedside Sorrow", which is the album's slowest track, but one of the best tracks.  The track begins quiet, then jumps into a soaring chorus that's built for an arena.  Another slightly slower track on the album is "With Fire (Comes Absolution)", but it still contains enough heaviness and catchiness to get fists pounding and heads banging.

It's hard to compare The Bloodline to any other band because they have their own identity, which is fantastic, and that's something very hard to find in this day and age.  If you're a fan of Trivium, Sevendust, Avenged Sevenfold, Five Finger Death Punch, Seether, Pantera and Killswitch Engage, you will love The Bloodline.  We Are One already has a secure spot in my top 10 albums of 2015, and is also one of this year's most essential releases.  This is a band that truly knows the meaning of the word "memorable".  I look forward to more music from The Bloodline in the future.  Pick up this album now!