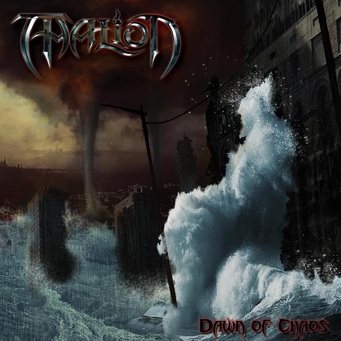 The Quebec local metal scene is thriving with many great bands popping out of the woodwork such as Eclipse Prophecy, Nordheim and Thalion. I've had the opportunity of seeing Eclipse Prophecy and Nordheim at a local Toronto show, and they both really pleased me. Thalion however wasn't there, but a representative of Maple Metal Records handed me Thalion's debut album, even though the band are an unsigned band. Thalion's debut album Dawn Of Chaos makes a good musical roller coaster with a lot of different changes in tempos and musical elements. Stephane Brindle's vocals are much in the vein of Rob Halford and Bruce Dickinson combined.

The title track “Dawn Of Chaos”, and "Nameless Pharaoh" offer solid headbanging grooves and shred-tastic solo work, and "Lord Of Metal" may have a cheesy title, but there's no possible way that you cannot headbang to the thrash attack in the middle section. The album takes an interesting turn with track 7 "Je Me Souviens" which kicks off with a jazzy guitar solo and the French lyrics give the album a fresh and uniqe new element. Even though there are really not many new grounds explored on Dawn Of Chaos, Thalion offer up a pleasantly pleasing and consistent album that should please all fans of power metal, Iron Maiden and Helloween. I'm interested to see the steps Thalion will take next.