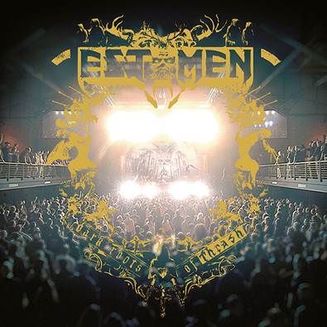 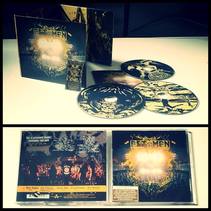 With 30 years and 10 studio albums under their belt, there is no denial that Testament are still one of the most relevant bands in the metal scene today.  Since releasing their latest album Dark Roots Of Earth in 2012, the band kept themselves busy with touring throughout 2013.  The band's headline tour at the start of the year is without a doubt one of Testament's most successful tours in the band's history, and one show from the tour resulted in a new live DVD/CD entitled Dark Roots Of Thrash.  It is easily one of the best live DVDs to ever be released.  The same can be said about the Live In London DVD as well.

The show was filmed on February 15, 2013 at the Paramount Theatre in Huntington, New York, with the setlist spanning a wide range of songs throughout the band's entire career, with the exception of a few records.  The DVD starts off with the Dark Roots Of Earth opening track "Rise Up", which I have always said is the perfect show opening song due to frontman Chuck Billy's commanding lyrics and the song's relentless intensity.  The setlist contains the standard Testament setlist staples such as "Into The Pit", "Practice What You Preach", "Over The Wall" and "The New Order", as well as tracks from the recent years such as "More Than Meets The Eye", "Native Blood" and "True American Hate", a couple of obscure tracks from The Gathering, namely "Riding The Snake" and "Eyes Of Wrath", and a few old-school tracks the band plays on a few occasions, namely "Burnt Offerings", "The Haunting", "Trial By Fire" and "Disciples Of The Watch".

Testament have always kept their reputation as a dynamic live band with the charisma of frontman Chuck Billy, the magical guitar tandem of Eric Peterson and Alex Skolnick, and the tightness of the rhythm section of bassist Greg Christian and drummer Gene Hoglan.  The stage show is made up of a riser that stretches across the entire stage with the Dark Roots Of Earth backdrop, as well as the old-school backdrop, which is something Testament has been doing heavily on this tour.

One downside about the DVD is that the Blu-ray is only available for store purchase in Europe and not in North America.  I don't really understand why a band would release a live DVD with a Blu-ray edition and not make it available in North America.  A song I wish the band could have included in the setlist is the Testament classic "Souls Of Black", because judging by it's sing-along chorus and the size of the venue and crowd as it would have fit perfectly in the set.  One thing about live releases that I love is when you get the audio disc of the show, and with the deluxe edition of this DVD, you get the DVD of the show, as well as the audio disc, which is the version I picked up.  The bonus material consists of backstage footage and the band's award-winning music video for "Native Blood".  I highly encourage every Testament fan to pick up this DVD because it's well-worth being included in your live DVD collection.

Highs:  Pounding mix, great stage show, fantastic setlist.  "Burnt Offerings" is one of the best performances on the DVD.

Lows:  The Blu-Ray is not available in North America.  "Souls Of Black" would have been perfect for this show.