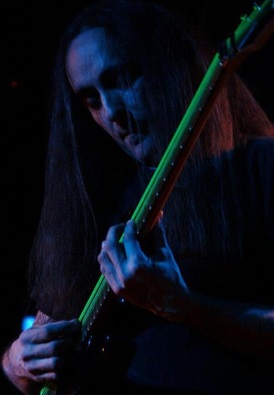 First of all I want to thank you for your time. I am honoured to have become acquainted with you and your music! Let us start with the first question.

1. From the research I conducted, I see that you started playing the guitar at the young age of 9, which then led to playing gigs at the local level by the age of 15.  What forces or people influenced you to pick up the guitar at such a young age, and what type of tunes did you cover in your teen years?

---Hey, thanks for giving me the opportunity to indulge myself and your readers! I was four when I first heard Led Zeppelin and that got the ball
rolling. My Grandfather was a jazz guitar player back in the day, and I would hear him play his D’Angelico through his Fender Twin, and thinking "I want to do that, but louder!"
As I was learning the guitar, I was absorbing the Year Of Our Lord 1982: Iron Maiden, Judas Priest, Scorpions, Accept, Rainbow, and Loudness. I loved the guitar tones and the overall energy. Around that time, I discovered Jimi Hendrix
and was ruined for life. Watching a video of him burning his guitar, I knew right then and there I had to be a musician. What was I thinking? (laughs)
In my teens, I wanted to cover nothing but heavy metal but the bands I played in did songs ranging from Joe Jackson to ELP. Helped me broaden my horizons yet I always wanted to be in a thrash or power metal band. I wasn’t cool enough then (laughs).


2. Has your Associates Degree in Music from Bergen Community College given you the insight and technical advantage in writing your songs?


---In my high school, there was no music program so I taught myself theory. When I went to college, I learned about composition, and my teacher Professor Marshall always said "Music is not about how you play it, but why." That really got me thinking about song construction as well as shredding. I knew that I wanted to be above my friends who were happy trying to sound like Bon Jovi or whatever the flavour of the day was.

3. Your 3 song demo, (The Pink Album), gained the attention of a Mr. Angelo Mimmo of Ibanez which garnered a regional, then a national endorsement.  How has this endorsement, and the guitar clinics enriched your life as a guitarist?


--I will say this: when I got my endorsement, I felt like Moses parting the red sea. A lot of people were incredibly jealous of me, and some were genuinely happy for me. I obtained my endorsement in a weird way: I helped Chris Broderick get a deal back in 2002 (now he’s with another guitar company as of this year) and in turn, the guys at Ibanez granted me one. I haven’t done clinics since 2005. Maybe it’s time they scheduled some for
me? (laughs) I miss giving little "classes" about technique and achieving guitar sounds. A lot of clinics are about showboating and little else. I made sure my clinics were fun yet informative. Nobody walked out of my clinics feeling like they didn’t learn something, I can guarantee that.

4. Did you get a response or reaction from the camp of Steve Vai or the label, Favored Nations, after submitting your 2nd album All Wired Up to
them?

--Mike Taft, now the A&R rep for Ibanez, gave Vai a copy of that album but I’m still waiting for an answer (laughs). I will be honest: if Vai listened
to it, he probably used it as a coaster for his iced tea later down the line.

5. You, and various band mates, have recorded a total of 4 albums to date, and 1 released EP.  Do you feel that you have progressed along the way? And which is your favorite compilation?

--Actually, GO BERZERK! is my fifth album, so forgive me for correcting you. That’s my OCD kicking in. I do feel I have progressed along the way, sometimes in inches, others in miles. Each album is unique unto itself but outside of GO BERZERK! I still say that ALL WIRED UP is a great album. That album and that line-up was special for so many reasons.

6.  As all musicians have their favorite artists, who would you say is the number 1 artist to have lent you the sound you produce?

--Obviously Steve Vai, but I also love hearing bands like the Police and Rush for various textures and breaking out of patterns that guitar players love so much. Living Colour is another huge influence on me as well.

7. Now that I have listened to your new album release titled, Go Berzerk!, I hear guitar stylings of Joe Satriani.  Is the tune, Surfing to Venus, a tribute of sorts to him?

--That title had nothing to do with Satriani, to be honest. The title came from another band called Psychefunkapus; they had a song called "Surfing On Jupiter", so I figured "Why not surf to a planet?" Recently, I found a Chili Peppers song called "Subway To Venus" as well, so I guess I’m in good company?
As far as the tune itself, the melody came first, which is odd because I always write riffs first. That melody happened as I was trying to learn a jazz
lick and find my inner George Benson. I thought it was the dumbest thing I ever wrote but my wife said, "That’s nice, you should keep it." And I can’t piss off my wife, right? Now it is one of my favourite songs and apparently everyone else thinks so too!

8.  Were the songs written solely by you, or did the existing members also play a part in the process?

--In the past I felt I had to write everything. But GO BERZERK! is the first album where I had someone else write a song. My friend/bass player Joe DeMott had these bass licks and said, "I want to use these on your album." I am glad I loosened the reigns a bit and now people love his song "Chomp" as well. I am thrilled that Joe is getting so much attention; we’ve been friends for 20 years and he’s such an amazing bass player, definitely inspiring to be around.

9. Have you realized your goals thus far?  if not, what would be the peak of your career?

--I will never be satisfied. Every album I’ve done has pulled me in a different direction, whether it was something I enjoyed or not. GO BERZERK! is
my best-selling album so far, and getting very positive reviews especially overseas. I would love to play a festival in Europe or Japan. That would be the ideal dream for me. I can do my version of AT BUDOKAN like Cheap Trick did, except there wouldn’t be screaming girls at my shows (laughs).

10. Finally, if you had the opportunity to play with an artist or band, (living or dead), who would that be?

--I would love to jam with Prince. He’s an amazing performer and guitar player. And I don’t care if I get shit for this but I would love to play on one
song with Anita Baker. She can sing me a Chinese menu and make my heart race (laughs).
As for dead people, well, let’s have a séance and get John Bonham, Cliff Burton, and Dimebag Darrell back for one night. I’d gladly sit in the audience for that one…