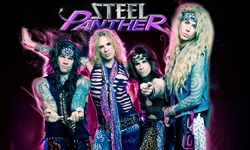 Now for a traditional MetalHead like me, the words, “Not even kicking and screaming” might have come out of my mouth when I gave thought to going to a Steel Panther show. However, the closed minded me left the house a long time ago. I been hearing a lot about this band for quite some time, and to be honest my initial thoughts were, “this must be a joke”. Well that part is true, but I’m here to bear witness and be the first to tell you that I am swallowing my own words.

So Steel Panther has come into town, and things will never be the same. The setting is Ft Lauderdale’s own Culture Room. Over the years, Culture Room has built up quite the reputation for being a premier Metal establishment in South Florida, with thousands of premier bands making it their stopping point and Steel Panther is no exception.

First up was Hillbilly Herald, not anyone I’ve ever heard of before, but being a true lover of music I’m always up for new stuff. The lights go out the band takes the stage, and action! Like a furious ball of energy, Hillbilly Herald is in full effect. Dressed in leather, dirty jeans and scruffy beards, they’re off to the races. Singer Jimmy Herald did an amazing job of leading the crowd. The band is incredibly tight; all members of the group did an incredible job of demonstrating stage presence. The music resembles an up tempo Classic/Southern rock group, with a new school flare. For a virtual unknown I would have to say that I was impressed by their sheer balls to the wall attitude.

Throughout the first four songs they definitely kept me on my feet wanting to hear more. If there is one critique that I do have about the show, it was into the fifth song, where the band broke into a cover AC/DC’s “TNT”. All in all it was a great song and honestly they did it justice, but my gripe was that it wasn’t the only cover. As a matter of fact they played three covers in total. This to me is a NO, NO as far as live shows go. Not taking anything away from the band, they had an incredible set, but writing original songs builds your own legacy, and people want new music.

And now for the main act, patiently we waited in a room so packed that I could barely get a sip of my drink without bumping into someone. The lights dim, and all we can see is the Steel Panther Logo in the backdrop. The crowd roars and Panther hits the stage. The first thing that immediately floored me was the energy in the room. Everyone was completely engaged with the band, and vice versa. And most importantly the hilarious stage antics that the band has trademarked into the Steel Panther image. From Lexxi Foxx’s fan blowing his hair ever so gently to his vanity makeup box, which was stage right to him the whole time. Not to mention Satchel’s taunting and teasing the girls in the crowd with sexual innuendos and off comment remarks. Michael Starr helps to lead this group of misfits by pumping in song after song with an incredible range and vocal ability. And of course some of the funniest one liners I’ve ever heard.

Putting the humor off to the side, Steel Panther is an incredibly talented band. All members although funny on stage, are no joke! Michael’s vocals are top notch. He has the ability to change pitch and range to incredible lengths. Tell you what, if Vince Neil decides to retire I nominate Michael Starr for the lead vocalist for Crue. Satchel played some punishing solos throughout the show, and yes his world rebound guitar solo towards the middle of the set was one of the best I’ve seen. At one point he even got back behind the drum set and played drums while performing his solo. I don’t want to take anything away from Stix(Drummer) and Lexxi(Bass guitar), but clearly in my opinion Satchel was the show. He led the crowd in comedic rants, encouraged girls to take their tops off, and competed with Lexxi on getting crowd attention. Pretty much embodying the spirit of the 80’s by encouraging heavy drug use, pretty hair, promiscuous sex with multiple partners and most of all A FUCKING GOOD TIME!!! By far the best show I’ve seen this year. Highly recommend for everyone to go out and see Steel Panther. Great music, good times, and everyone gets laid! Well sort of.