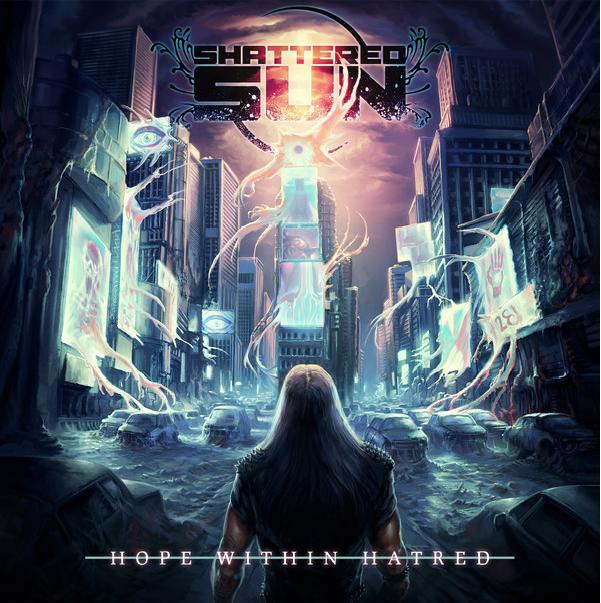 There's nothing that perks my ears more than aggression mixed with melody. When people think of metalcore, they generally think of breakdowns, but Texas up-and-comers Shattered Sun are more about the riffs and solid songwriting, and they also incorporate a bit of thrash influences into their music. The band's debut album Hope Within Hatred is now available and is a juggernaut of modern metal.

"The Ultimatum" kicks the album off with a finger-to-the-face message to all the naysayers in the band's lives and is a potent musical combination of brutality and melody. The melodic choruses are very well executed and the riffs are seriously hooky and catchy, as proven on tracks like the title track, "Burning Regrets", "Victory Or Death", "Reign Over Me" and "Waging War". The intro riff of the title track carries more of a pop punk feel, but is immediately followed by a crushing riff with serious groove, and the track's chorus is one of the best choruses on the album. Marcos Leal's vocals give you the urge to sing along or pound your fist in the air. He really gets to showcase his vocal abilities on "281", which is just a vocal and guitar piece. The album's closer is a cover of Testament's classic ballad "Return To Serenity", which the band executes to perfection. The only difference between their version and the original is that the band does a complete 180 in the chorus and goes heavy instead of melodic. For anyone that doesn't know, Shattered Sun are signed to Chuck Billy's management label "Breaking Bands". Marcos Leal told me that they recorded the song in a Spanish version as well.

I would say the only flaw about this album is that the sound is almost identical to Killswitch Engage, where the guitar tone is very similar to Adam Dutkiewicz's and Joel Stroetzel's and the vocals come pretty close to Jesse Leach's. I don't feel that they're trying to replicate Killswitch Engage's sound, I just think that the tone and vocals could confuse some listeners into thinking they're listening to Killswitch Engage. Aside from this minor flaw, Hope Within Hatred is a solid metal album with great songwriting and structures. There's a multitude of catchiness all over the album and should please fans of both metal and hard rock. Get this album now and catch Shattered Sun on tour.

Highs: "The Ultimatum", "Hope Within Hatred", "Burning Regrets" and "Return To Serenity"

Lows: Their sound comes a little TOO close to Killswitch Engage.