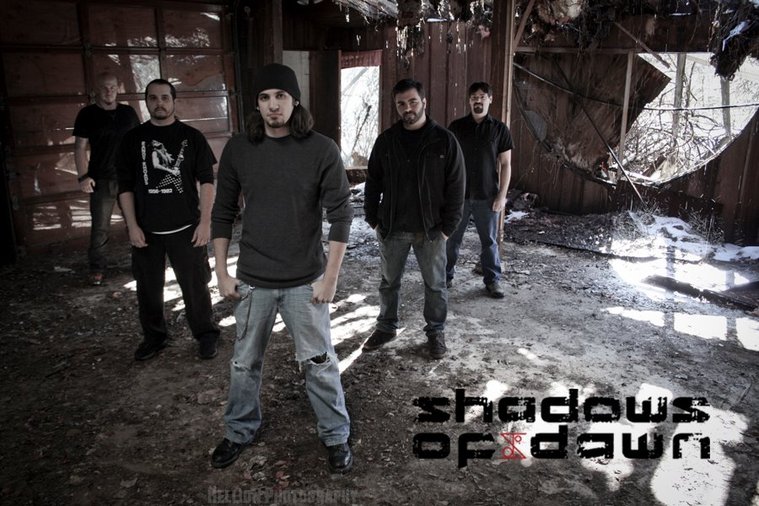 Shadows of Dawn, the self proclaimed “serial killers of speed metal” and “trans-dimensional thrash masters of the multiverse” have large shoes to fill based on those words alone. Having listened to only two of their songs, I can easily say that they exceeded my already high expectations, as both songs provide a multilayered sound, consisting of classic thrash elements while venturing into other subgenres as well.

The band’s front man, Dan Lassen, brings a unique approach to the vocals. Between the songs “Shadows of Dawn” and “Heavenfall,” it is clear that Lassen has a decent vocal range, but is more subtle than expected. Unlike many modern vocalists who try really hard to display an insane range of pitch in a single verse, Lassen finds a pitch appropriate for the song and generally stays there as long as necessary, which is refreshing to me. This is notable since the vocals switch from gravel-throated to clean, yet deep in the same song, but never feel forced. The gravel-throated sections are fitting, but not cartoonish or exaggerated and the clean sections still convey an equal amount of menace.

The instruments are played at the speed and intensity one would expect from a speed/thrash metal band, but the orchestral elements of the keyboards in the background provide a unique, atmospheric sound and truly punctuate the aggressive instrumental approach. The first song, “Shadows of Dawn,” features intense pounding drums and a large wall of thrashing sound. The chorus is surprisingly catchy for a thrash metal song and I mean that in the best way possible. The guitar work is top notch, especially during the excellent solo in the last half which is accompanied by keyboards.

The second song, “Heavenfall,” is a seven-minute epic track that effectively displays the band’s distinctive atmosphere. It begins with gentle keyboards playing orchestral strings and choral vocals accompanied by a raw and thrashing guitar riff. The vocals here are sung at a slightly higher pitch than before, while still switching between gravel-throated and clean singing. On “Heavenfall,” the chorus also incorporates a more anthemic vocal style than on “Shadows of Dawn,” giving the song a heart pounding and very large sound, reminiscent of symphonic power metal, only played in a heavier tone. Around the three minute mark, there is a melodic section which displays some impressive guitar solos and adds yet another dimension to an already epic song.

The music on these two songs are intense, exciting and played with musical sophistication, all of which are elements I admire the most in a metal band. Shadows of Dawn are highly recommended to listeners who crave the traditional thrash metal sound, but enjoy other styles as well. As a metalhead who loves thrash and power metal along with classical music and other genres, Shadows of Dawn was a very refreshing band to listen to and I will continue listening to new songs when available.