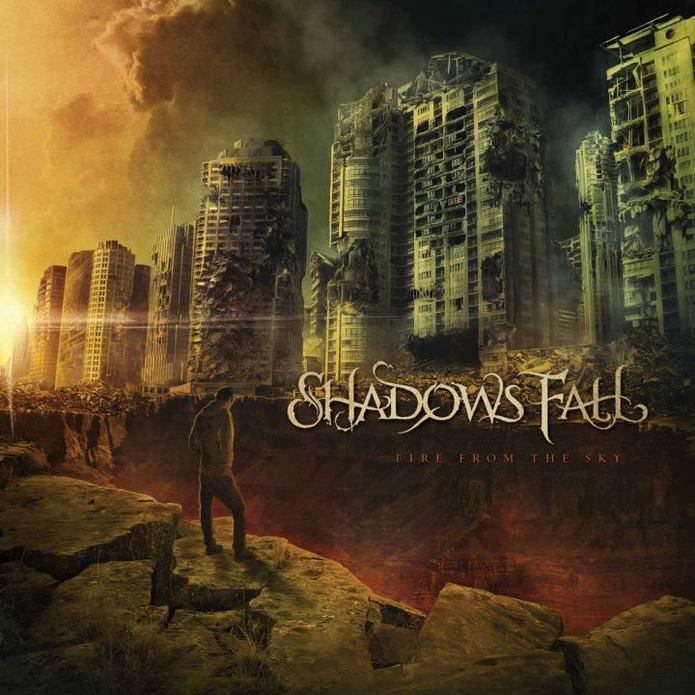 Shadows Fall are pretty much this generation's Testament, because Testament is known for having the perfect mix of pure sonic aggression, catchy melodicism, great serious hooks, and intricate guitar solos in their songs.  When you listen to Shadows Fall, you can totally hear the Testament influence.  The band's brand new studio album Fire From The Sky is the band's seventh studio album, and it's another great one.  The last album Retribution which came out in 2009 was definitely one of their heaviest albums and is definitely one of my favourites.  What's also amazing about this album is it was produced by Killswitch Engage and Times Of Grace guitarist Adam Dutkiewicz.  Put all these guys together, the Massholes will make a great album.

The album's opener and first single The Unknown starts off with an intricate lead from lead guitarist Jon Donais, then kicks into a hooky fast riff and features awesome aggressive vocals in the verses and a catchy melodic chorus.  Jon Donais shines brightly on this track with a ripping guitar solo in the middle of the song.  Now every song on the album features just what you can expect from Shadows Fall like heavy riffs, aggressive verses and melodic choruses.  The second track Divide & Conquer is one of the catchiest songs on the album, where the beginning riffs have some serious hooks, and almost has a feel of Metallica's Black Album.

The album's title track starts off with a slower pace, but the main riff is also really heavy.  Rhythm guitarist Matt Bachand is known for doing the death growls in some of the bands songs.  The title track features some of his most aggressive death growls ever, which just makes the song that much heavier and really gets your adrenaline going.  The middle section is where the song picks up speed, and Jon delivers a high speed shredding guitar solo in this song.

The opening riff on the track Save Your Soul is one of the band's most potent riffs ever and almost has the feel of older tracks like Thoughts Without Words and What Drives The Weak.  The track Blind Faith is the only track on the album that reaches over the 6 minute mark, which opens with a soft acoustic intro before amping up into gut-busting heaviess, and a catchy melodic chorus.

If you're a lover of sheer brutality, then listen to the tracks Lost Within and The Wasteland.  Those two tracks have their melodic choruses, but also have some equally brutal riffs and feature some of Jason Bittner's best drumming on the album.

Shadows Fall never disappoints.  As I mentioned at the top, they're like the Testament of this generation, because Testament never disappoints as well.  Fire From The Sky definitely has a bit more old school Shadows Fall moments on it, and that's what will make a lot of die-hard Shadows Fall fans really happy.  I think it also has vocalist Brian Fair's best vocal performance yet.  This album is already safe in my Top 10 Records of 2012 list, which I will post the full list at the end of this year.  Amazing album.  Buy it NOW!