SEMI FINAL ROUND ii IN TORONTO ON
JUNE 7, 2013 AT THE RIVOLI 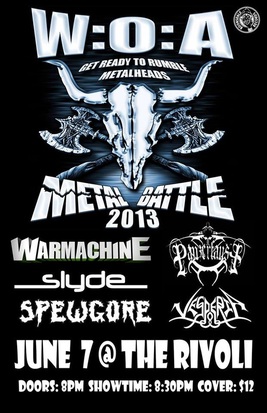 One band will rise above all others to represent their nation with highest honor at the 2013 Wacken Festival in Germany!

Hosted by The Governor from "The Governor’s Ball"
http://www.thegovernorsball.com/

As we arrived on Queen St. west, the daytime crowd was packing up as the nighttime crowds were slowly congregating on the patios and at the bars. Metalheads were trickling in to the Rivioli and many were outside enjoying a fairly decent evening. The bands had their equipment set up, ready for the night’s event.

Hanging with band members, and chatting with many local metalheads gave way to Spewgore initiating the night's events, as they were the first up on stage. With drinks in hand, we ventured closer to the stage to support the band as many others were doing. Spewgore were the perfect opener for the night. They got the crowd ready with their thrashing party anthems.

Next up was the band Slyde. Having chatted with Sarah, the pint-sized energy ball on the keyboards, I came to understand that this band feels they are out their element when sharing the stage on a night like this one. Her concerns aside, Slyde proved to hold their own ground and gain much respect from many heads in the crowds.

Time for Viking metal from Vesperia! We ensured we had pints in hand, and had our spot at the front of the stage. I love how this band can excite the crowd to the point of a decent pit for a narrow venue. A crowd favourite for sure!

Black metal showed up as Panzerfaust prepared the stage for their show. They performed their show as expected, and presented the unmistakable image of the genre. They would win the hearts and souls of many Norwegian metal heads.

Warmachine were the final band. Their performance and sound was solid, and gave a more classic heavy metal feel to the night. Meeting and speaking with Glenn5 (formerly of Anvil) was a bonus for our night!
The Governor, (Andrew Epstein), lent much laughter with his always entertaining self. Many would agree, he is the perfect host for all things metal!!

Now the announcement of the nights winner: VESPERIA! With Adrenechrome holding onto the wild card spot. Congrats to these bands!

We do apologize ahead of time for not getting any shots of Panzerfaust as the lighting during their show was too low for our camera equipment, and we do not use any flash devices during shows.  You may view pics from the qualifying round 5 for pics of this band here.