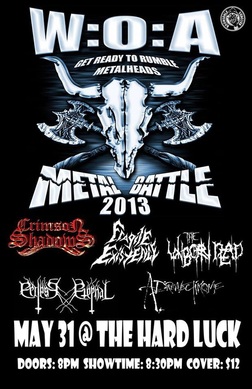 Bands in this round:
FRAGILE EXISTENCE
http://www.facebook.com/FragileExistence/

The evening was warm, and sticky. Rain threatened to come down at any time. This did not dampen the spirits of  anyone heading to the show.
The Unborn Dead were the opening band who were very happy to be playing this event and sharing the stage with so many local talented bands.
A dedicated group of heads to Eclipse Eternal livened up the dance floor as the band gave one of their best performances.
Adrenechrome also brought out their share of devotees. Their portion of the event excited many into a full blow pit dance party.
It became apparent to me that the crowd was anxiously awaiting for the ale drinking, and bearded band otherwise known as Crimson Shadows.  They looked larger than life on the small stage, which did not give much room for the very animated Jimi to express himself.
There were many rounds of pit action during their time on stage, (and probably much beer being sold at the bar!)
The final band of the night were Fragile Existence. Again, they gave a solid performance.
All the bands gave the best show they could to a sizable crowd of metal fans. This was a show that had true grit, and heart. Many thanks to the bands for their efforts, and for entertaining us to the max.
Kudos must be given to Andrew Epstein (of the Governor's Ball) who completely and thoroughly ticked our.....sense of humour with his witty and amusing quips between bands.
Congratulations to Crimson Shadows for moving on to the final round on June 22, 2013 at The Opera House.  Adrenechrome have been give a wild card spot, so congrats to them too.