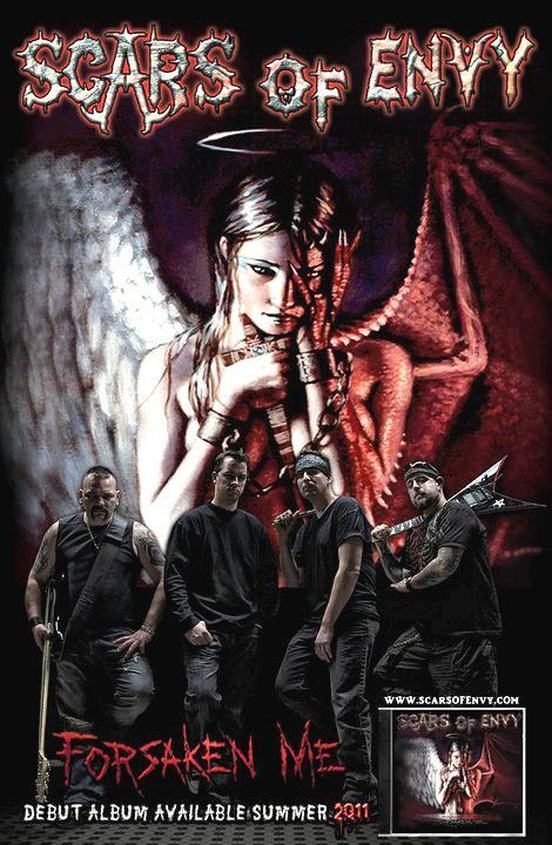 Review of album titled "Forsaken Me"

Rising from New Jersey, the band Scars of Envy unleash a great mix of brutality and melody, using a wall of sound that is at one point familiar, yet undeniably engaging. On their album, “Forsaken Me,” all of the songs have an interesting contrast between slower, melodic sections interchanged with chugging riffs, featuring gravel throated vocals that show believable aggression, yet are still intelligible. As a whole, the instrumentals and musicianship show a wide range of influences and as a result, this is most accurately classified as traditional metal that successfully mixes old and new influences. Scars of Envy have a sound that will please fans of both mainstream and lesser-known metal bands alike. Their approach is more sophisticated and serious than the average metal band, yet it still maintains a sound that is true to the more extreme aspects of the genre.

On the website cdbaby.com, the album description states the band’s intention was to provide “a message of hope through hostile expression.” This shows greatly on the album, which provides passionate, heartfelt instrumentals mixed with a raw, aggressive approach that gives Scars of Envy the same edge as many extreme metal bands, while still presenting an accessible side that allows for a wider listening base. Despite having decent production values and a sound that many can appreciate, one shouldn’t mistake Scars of Envy as some softened mainstream metal band with no edge. The band has a large and, at times, epic sound that many others lack. The power chords, riffs and vocals provide a large and bludgeoning wall of sound that will please metalheads looking for something that is both sophisticated and edgy.

As far as the songs go, there are a total of 10 tracks which are listed below.

I mainly wanted to note that on the band’s Facebook page and on ReverbNation page, the first song “Bred to Conquer” is missing its melodic intro, which is present on the press release version I was given. If you can, try to find the six-minute version of that song because the melodic intro is an amazing mix of acoustic and electric guitar that adds a whole layer of power to the album. Altogether, Scars of Envy unleash a combination of melody and heaviness, traditional and modern instrumental techniques with a somewhat progressive, yet very large sound.