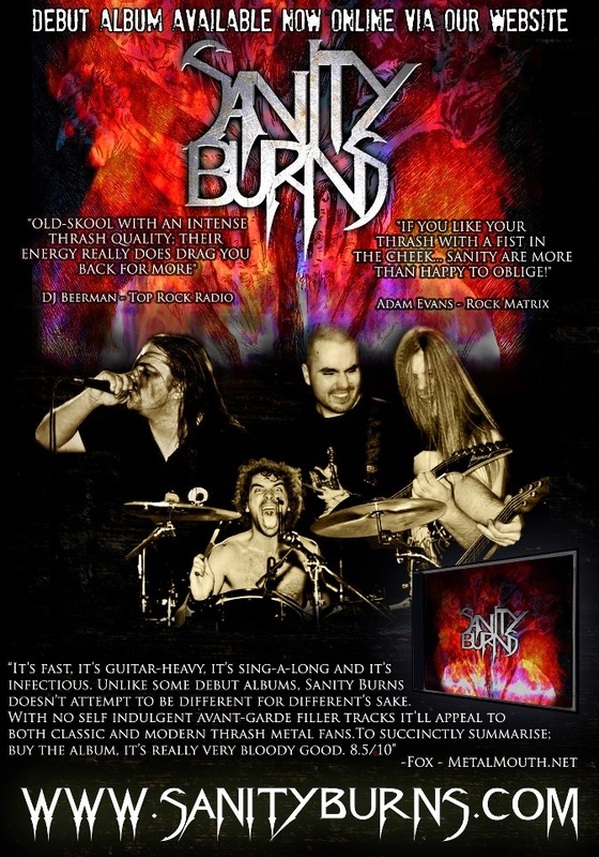 The beginnings of what was to become the band Sanity Burns started in the summer of 2007 under the name of As Sanity Turns Black. Don, being the only original member left of the latter band name, began his recruitment of members needed to continue as a band. James auditioned for the lead guitar spot, and was hired immediately. This moved Don from guitar to bass position.
The band played shows and festivals in 2008 with Jason Brett on drums and Frazer Bowdery on rhythm guitar.
In 2010 Hugo was introduced to Sanity Burns and became the drummer. That same year the band were playing alongside Subversion and TesseracT in Camden's "Underworld", and supporting Onslaught in Maidstone.
With the help of James D. Bell (Rick Dufay / Chris Slade / Led Zep / Jimmy Miller), the band recorded their self-titled album in 2011.
Chris, (who recorded vocals on the album), left the band in 2012. Richard joined as the new vocalist and is touring with the band currently.
As I start to listen to the first tune "Relentless" I think of partying at the local metal bar in town. We then get into "Eternity", which will instantly become an anthem; aggressive vocals fit in with the well-executed guitar hooks and tempo changes in this tune. Damn, when "Killed in Action" kicks in, the high energy gets my blood pumping. Lots of high hat action from Hugo in this song, with the tempo gaining speed three-fourths
of the way through. "Fracture" gives us the southern United States sound and feel. I am into the vocal style Chris delivers in this tune. "Embers" is far more subdued, mellow if you will. I have to say the vocals of this song are passionate,  emotional and allows one to think of those reflective moments of life.
The tune, "Ashes", is full of feisty attitude. The theme of the battle between the light and the dark runs through this tune. A persons fight against becoming powerless to dark forces.
"Massacre" runs on double time. I am reminded so hard of a Canadian band from Ottawa, Ontario: Joe Thrasher. A fave thrash party band here in Canada. Ok, sounds like we are in a mad German scientist's lab in "Black Widow". In the song "Shitface", we are finally getting more guitar from James and the album concludes with "Schizophrenia" which delivers classical guitar styles, until the drums kick in: then the guitar picks up the pace of the song with more aggression. An interesting choice for an endng piece.
Overall, this debut album has been produced to reflect the individual personality of each song. If you live in or around London, England, get out and support your local band, Sanity Burns!