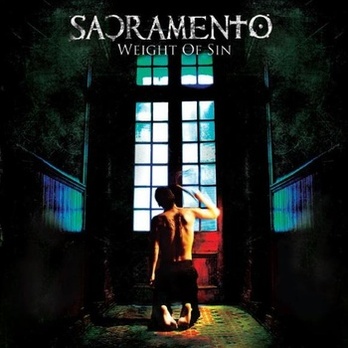 Album being reviewed: Weight of Sin.

South America was first introduced to the band Sacramento back in 2009 with the debut release of their self titled EP. They had seperated themselves from other numerous bands floating around at the time in Chile, and South America. The band steared away from the onslaught of Death, and Thrash metal by creating their own unique METAL sound with one of the finest female voices one could ever hope to hear in this genre! This is evident in the their first released video from the tune “Fallecer”.

In 2010, and after sharing the stage with bands such as Theater of Tragedy, they also received attention from the mainstream media. They went back into the studio to record their first full length album. The first release from the newly recorded album is the song “Purple”. This song garnered much buzz from fans, and industry contacts were coming in from Europe, U.S.A., and Latin America. The album “Weight of Sin” was dropped on June 15th, 2011.

There are 10 tracks on the this ablum, and I will give my impressions and thoughts on only a few of these.

The entry of the song leads to thrashing guitars and double beats from the drums, with a strong bass presence, and the female vocals to portray the woman is left feeling “purple”, much like feeling blue, but deeper. You can feel the anguished turmoil of the heart from Laura's vocals, and the male dominance comes in at the end of the song. The final feature is the instrumental fluttering, like that of a butterfly, or is it love leaving on a wave?

Of all the great tunes on this album, this is my fave. It definitely has the metal sound. Kick ass bass, drums, and lead guitar are all here in one package. This one has the melodious rhythm that get the head banging!

This tune has more of a heavy rock edge, and could be a radio release that would climb the charts here in North America, in my opinion. Again, the very fine vocals complimented by steady drum beats, solid guitar playing, and bass fanning giving this song a groove feel.

Overall, I have grown fond of Weight of Sin. The album has been produced to give the listener the opportunity to really appreciate just how beautiful Laura's voice is. The slower tempo of some songs really accentuates this. I am reminded of heavy rock from the the 1980's when female fronted bands were more prominent, and fans appreciated the beauty of singing. Thank you Sacramento for bringing this style back to the forefront!

You can purchase the digital download of the album, and the bonus video of “Fallecer” through this link:
http://music.digmetalworld.com/album/weight-of-sin