ROUND ONE IN TORONTO AT THE RIVOLI 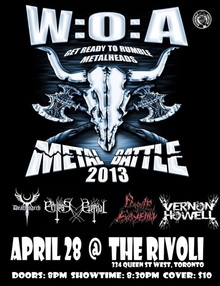 The first band, Vernon Howell, started the nights event to a small but eager crowd. The vocalist continually reminded us of their name between songs, for those who might forget.
Overall they gave a solid show, predictable core influences. They could not quite invoke the reaction they were seeking from the crowd.
On to the band Deathmarch. Here we had a band in black, some chain maille, and spike laced leather arm bands. I knew we were about to be hit with beer, mead, viking type drenched melodic metal with Canadian flavour.
Fragile Existence brought more energy through their tunes, and persistent challenges to the audience to WAKE UP! Granted this is Sunday night, this band wanted us to party and enjoy what they had to offer up.  Their brand of metal highlights the existance of talent in our great city of Toronto.
The final band of the night, Eclipse Eternal, delivered the 1, 2 punch that many in the crowd were waiting for. This band encapsulates extreme metal, with props, and make up at their shows. They embody all things that black metal is.

Congratulations to the 2 bands Fragile Existence, and Eclipse Eternal. They are moving on to the semi finals scheduled on one of two dates:
Friday, May 31 – Hard Luck – Toronto, ON
Friday, June 7 – Rivoli – Toronto, ON