round 2 in toronto at the rivoli 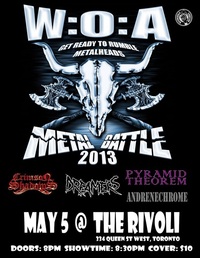 
We were one of the first to arrive to the nights event. The room was warm, and somewhat darkened. The judges tables were set up, and the bands had loaded their equipment.
The crowd trickled in right before the first set of the evening.
There seemed to be more anticipation from the fans of the four bands on this second battle night. The energy could be felt immediately as the first band started up.
The support given to each band of the night was truly inspring. We have bands in our city who are truly appreciated for their tunes, and shows.
The judges had a tough time picking the two finalists for the semi final round. As stated by one of the judges, Andrew, (of The Governor's Ball), all the bands deserved our respect for the hard work they put in. Indeed Andrew!
Winners for the night are Adrenechrome, and Crimson Shadows. Congrats to them for moving to the next round.