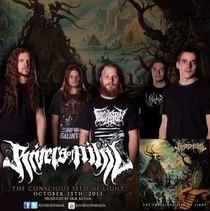 The Conscious Seed of Light album begins with a very solid introductory instrumental. I am usually one to toss all thought of short intro’s aside, but this one serves a good purpose. The gradual build up with its entrancing melody, the bass softly pounding in the background steadily merging with the destructive crashing of symbols towards the end of the song is absolutely mesmerizing. On top of all this, it ties into the second track beautifully.

Rivers of Nihil’s vocals could be described as aggressive shouting, they are similar to Meshuggah’s in that sense but sound meaner and a little more strained, nonetheless totally vicious. The lyrics are still very understandable which a lot of people like myself appreciate greatly. They occasionally switch to a gentle but still deadly growl for a few verses, but only in a couple songs. There’s nothing wrong with all out hell-bent guttural growls, but it sure is nice to learn the lyrics from just listening casually and not having to look them up.

The bass can be heard more often than not, blaring a wild line going in every direction, tying the chaos formed between the guitars and drums together. Said guitars and drums are usually playing at the same speed through the entire album, always keeping a steady melody brewing.

I recommend the introductory track “Terrestria I: Thaw” combined with the following song “Rain Eater” if you desire to check this band out. Just as the hypnotic riffs of the prior are ending, the latter picks up what was left behind and quickly turns it around into a savage explosion of metal rage. Also, the fading outro to “Rain Eater” is captivating in every sense.

There is a severe lack of solos on this album, so if you are hungry for such then you may be filled with a bit of disappointment after listening to The Conscious Seed of Light. Aside from that, everything featured here is a masterful presentation of modern technical death metal, which in my opinion easily makes up for the lack of guitar spotlight.