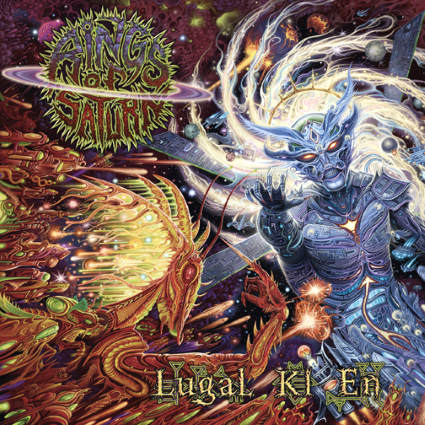 Rings of Saturn is:

Rings of Saturn are inhuman post-digital precision, slick and clean even amidst the depths this style is clearly capable of plumbing. Self-described "aliencore" and absolutely drilling in its pointedness, this album is spectacularly tight and technical even when losing its mind entirely in the grind and the guttural. Right off the mark full destruction reigns, the opening track "Senseless Massacre" living up to its name and pulverizing from the first second before a beautiful melody flows seamlessly into the closest thing this song has to a hook. While this explosive leadoff symbolizes the blend of mercurial hyper-melody and impossibly massive sledgehammer rhythm to be found in abundance on the record, the second tune, "Desolate Paradise" ratchets up the intensity of both. Sparked by a spiraling lead break and elevated by perfect use of mood-bending near-ambiance, demands of the listener to "wake from slumber" precede its going wildly off on a treble-happy shred excursion that drops into a breakdown that would leave the proudest hardcore kid in fear for his life.

Track 3, "Lalassu Xul" is an altogether different beast from the groove-laden doom I'm so used to. Bungle-esque carnivale-bounce frames the mechanistic and repetitive drillpress xeno-grind in an off kilter its-happy-music-if-you're-a-robotic-serial-killer kind of way. Following up that is "Infused", one of the more humanoid bytes from this disc. A standout track, the cyborg blending of wicked thrashed out human guitar-play and galactic death-crush virulence is top notch, near painful in its attempt to drive -through- the star rather than go around. After the short and appropriately-named interlude "Fractal Intake", the midway point that is "Natural Selection" restarts the malevolence in a cauldron of pistoning meticulousness. Spiteful electronic spikes of twisting melody slicing through the jackhammer trigger-warning drums before "Beckon" calls the terraforming ships in to calculate and articulate how your planet will be destroyed, ending in a wonderfully lucid echo-driven final drive toward peace before "Godless Times" schizoanalytically (go look it up, I'll wait.) progresses from shrieking lockstep to doomed-to-drift breakdown to tech-splatter and beyond. An industrialized /solar/ intensification of death, grind, and deathcore tropes into a vicious exclamation of hybridization.

"Unsympathetic Intellect" is a peak moment, the first few seconds vividly portraying the wonderment that could come from the Eye or access point of a vast intelligence turning its gaze upon you before it begins to communicate /before it reminds you just how alien it can be/ before it ups the grind in unsettling/hectic/body hammer measure. Not to be outdone, "Eviscerate" flashes without segue between several modes of RoS' extraterrestrial stylistic choice, rapid-fire alterations and complications of their sound continue unabated as the instrumental "The Heavens have Fallen" shows a lush, almost comforting form. Maybe a reminder of technology's inherent promise hidden in ultimate wasteful destruction/a breath of resistance before the ferocious 12th and final track "No Pity for a Coward" brings ending in a violent, direct assault of laser-guided planet-glassing before our new overlords descend to greet us in star-wrecked climax.

The Alex Grey meets Voltron artwork sums up the tone of this release tremendously. There is no hope. The visitors do not come in peace. Surrender or face immanent annihilation.