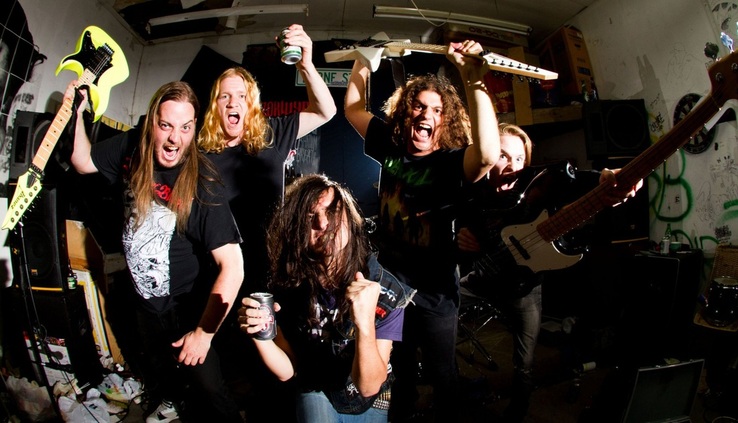 Razorwyre is influenced by Thrash, Speed Metal, Heavy Metal, NWOBHM and Hard Rock. And it shows in their collection of songs I enjoyed immensely!

Razorwyre says they were initially conceived by Chris Calavrias and James Murray, who were inspired in 2008 to create new music in the true style of 1980’s Heavy Metal. In early 2009 the line-up for the band was complete and the five like-minded individuals became a Metal unit and began playing their brand of Metal at live gigs around Wellington and other cities in New Zealand under the banner of Gaywyre. As the band’s reputation grew and their harder-edged thrashing style developed, it was decided a new name was necessary to express their more assault driven, violent music. In 2010 they changed their name to Razorwyre to better fit the tone of their music. With this release of their first EP and the planned release of a full-length album, Razorwyre plans to continue their Metal attack, spreading beer-fueled mayhem further. Cheers to their campaign and perhaps they will achieve domination of the Metal Universe!

I love this job! I was sent the five song debut EP from Razorwyre. I opened the first track and was immediately punched in the mouth followed by a kick in the teeth. From the opening onslaught of drumming followed quickly by a wall of vocals screaming, “yeah!”, Party of Five explains what Razorwyre gives me: a party of Metal music to satisfy my craving for some classic 80’s vocals style of Metal, while keeping their music sounding fresh.

Fuck You Tonight continues the attack with a heavy, hard beating rhythm and vocals reminiscent of a punk/thrash fusion, but then breaks into classic sounding Heavy Metal with a screaming lead guitar showcase to keep the song exciting and inspiring. This song could be my next head banging anthem, at least until the next band’s music passes through the internet to land in my music folder and can convince me otherwise.

You can download this EP, “Coming Out” from their band page, http://www.razorwyreband.com/, where you can find, in addition to the two songs mentioned above, Operation Market Garden, Suspira and Battleshark. The ending of Suspira, by the way, is quite a fun listen. I’ll let the readers discover this for themselves. Battleshark begins with an epic sounding intro. I’ll say no more. Seek and enjoy!