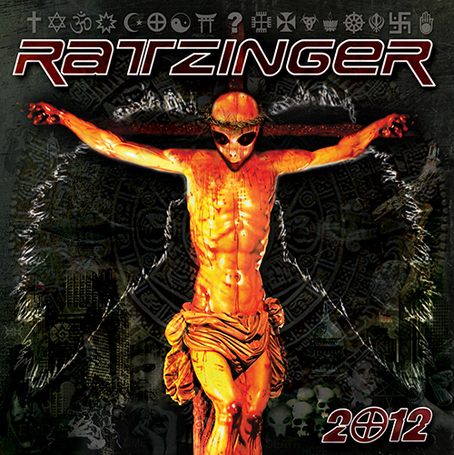 From the mountains Santiago, Chile I bring you Ratzinger. Only words that I can use to describe this group would be “Fast, aggressive, and in your face”. It’s been nearly five years since Ratzinger burst onto the scene with their debut album “State Enemy”, which followed their 2005 EP “Under Attack”. The album and their efforts were well received in Latin America and throughout the world. The attention that they gained from “State Enemy” has not only allowed them to tour throughout their home country of Chile, but Argentina, Poland, and Germany as well.

Ivan Vega leads the pack as the bands front man and rhythm guitarist, bringing a mix of English and Spanish vocals fueled by sheer aggressiveness. With a rhythm guitarist in the lineup Ratzingers lead guitarist duties fall upon Felipe Majluf who rips some extraordinary tasty leads. Fabian Hachim is the force behind the drums that sets the tone and drives the rhythm. It appears that currently Patricio Garcia has left the band and Ratzinger in search of a replacement.

With hard work and perseverance Ratzinger returned to the studio and set forth to create their follow-up album. And impressive it is, “2012” has 10 incredible songs, and five bonus tracks remixed and mastered from previous efforts. To add fuel to the fire Ratzinger has also provided us with a video for ‘Make Make” symbolically released on 09-11-2011.

Check it out here: http://www.youtube.com/watch?v=bVMGCEzfFyM

Words are hard to describe what “Make Make” brings to the metal world. From the first beat you are in for a ride. Fabian begins with an almost tribal like drum sound which begins to pound in your speakers back it up with double bass and toms. Queue Felipe’s and Patricio’s guitars, which come in with a slow introduction, add some flange, and rip with speed. Then in comes Ivan with some very aggressive well placed Spanish sung vocals.

From Start to finish “Make Make” drives force and won’t let you down. I didn’t know what to expect when I first was given the opportunity to review Ratzinger, but I must tell you the more I heard the more I was impressed. However I do prefer to have Ivan sing in Spanish his native tongue, in English his accent does stand out a bit, which although is not bad sounding, it does seem a little out of place.

Overall this is a great effort by our Chilean brothers. The Latin American metal scene is alive and well, if you have not heard of Ratzinger look them up, and listen to what they have to offer. You might just like what you hear.