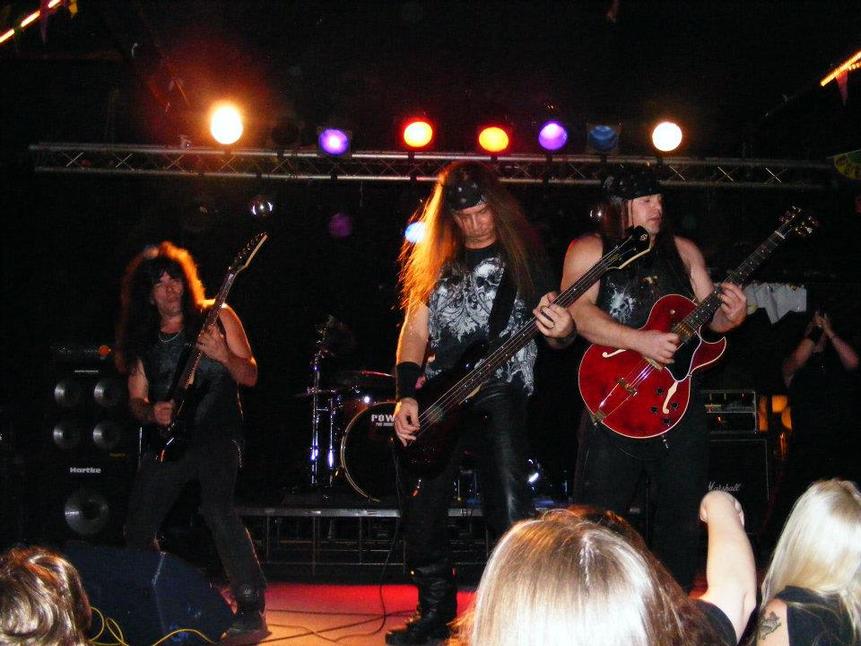 Interview with the band Pownd on February 3, 2012

It’s a pleasure to meet you guys and I appreciate you allowing me to interview you.

Michael –You’re welcome and thank you.

1. When did you first become POWND?

Michael – We first started in ’96. Me and Ronnie started it. Ricky joined in 98, just after our first album, POWND.

2. How many albums have you released?

Michael -The album coming out in April, Part of the Black will be our third full release.

3. What bands have inspired you?

Michael – Iron Maiden to Dio to Queen to Judas Priest, the list goes on and on.

4. So, with the influences, what do you call your type of metal?

Michael – Yeah, true Metal. We were called a rock band armored in metal a few years back, which we liked. Like a Heavy Metal Aerosmith. We always like to incorporate melody into our music. Progressive Metal.

5. Who writes the music and lyrics? I know you perform original music.

Michael – We all do. Ricky writes and I write as well as Ronnie. I might write half a song and then turn it over to Rick, or he will write something and turn it over for someone else to work on. It gives us freedom. It’s always been a collaboration, which, I think, gives our music such the diversity that it has.

6. What prominent bands have you shared venues and the stage with?

Michael – Another good question. RATT. to Opeth, Children of Bodom, Nevermore, Triumph, Armored Saint, Bret Michaels, the list goes on and on.

7. Every member of the band has other projects besides POWND……

Michael – Yes, we’re all very easy that way. We like to explore and grow musically and that’s how we do that, playing with other artists.

8. I’ve never seen them but I’ve watched videos of another band called the Electric Love Buzzards. Rick Sargent, you are in that band?

9. Michael, I heard a rumor you are going to Europe later in the spring…….

Michael – Yes, South America and Europe with Shatter Messiah, another original product with members of Nevermore and Annihilator.

10. Tell me about Thunder Tribe…

Michael – Thunder Tribe is the Art of Heavy Metal. We cover just about every cool Heavy Metal song you can imagine.

11. Michael, your brother Ronnie plays in that band as well. What other projects does he work on?

Steve, it’s nice to meet you.

12. Steve, how long have you been with POWND?

Steve - About two years now. I played in a band called Skull Cap for about 10 years. We played all around Northern Kentucky and the Cincinnati area.

13. Are you involved in any other side projects at this time?

Steve – I’m starting up one now with some of the local Lexington guys. It’s sort of a Thunder Tribe like thing, the more hard rock, and 80’s Metal thing.

Steve – We haven’t decided on a name, yet. We’ve only had a few practices so far. Jimmy Matherly and Blake Harris are in it. A couple familiar names.

15. Tell me about the Metal scene in Kentucky.

Michael – It’s horrible. Louisville is a little better. Lexington is unsupportive of it. As much as we’ve done, as long as we’ve been around, we’ve been blessed that there’s always been a following for us. In it’s day, Double Q (a Lexington radio station) helped us and paid attention to us, but as DJ’s move around and switch and go, we lose contact and it’s kind of faded into nothingness, until now we’ve went elsewhere, to Detroit and Cleveland, bigger cities. That’s how we got our reputation. We were willing to leave instead of staying in one place.

16. Is the environment improving, though, for Metal in Louisville?

Michael – In Louisville, yes, but Lexington, unfortunately, no. We still pull crowds there with Thunder Tribe and POWND, but that’s because we barely do it. If we show up every three, four months, they want to hear us. Our old fans come out, but it’s harder to make the new fans.

17. This is a question for Ronnie Duncan……

18. Heh heh. I was asking the other members about side projects. What other projects are you involved in?

Ronnie – I am in Thunder Tribe and POWND. Other than that, I stay home and write and record music. We used to do an acoustic thing, Mike, Rick and me. We’re thinking about doing that again. But POWND and Thunder Tribe are my main focus right now.

Michael – That’s God Like Status, another one of my bands. We just released an album. That’s more of Power Metal, European metal style, like Kamelot, some of the European Metal bands.

21. Are you planning to produce other bands?

Michael – I’m not necessarily planning to produce other bands, but I will be releasing other bands on my label, True Metal Records.

22. What got you two interested in playing Metal music?

Ronnie – I was a big fan of Rush at a young age, Iron Maiden, Judas Priest, Black Sabbath. I heard that music as a young kid and it’s stayed with me ever since. I always dreamed of meeting some of those guys.

24. Did you guys take music lessons when you were young?

Ronnie – I taught myself.

Michael – I was just born with it.

Ronnie – He was playing drums when he was five, tearin’ it up. He played in my uncle’s band at weddings.

Michael – I was like their feature. I played three songs at every show they did. They became pretty popular because they had this five year old kid come out and play three songs.

Ronnie – I was the remedial one. I didn’t start until I was 17. Michael was always the star of the family. When he started getting into bands, he made sure I got in the bands even though I wasn’t any good. I had to get good and work hard, practice and practice.

Michael – You want me to be in your band? Sure, but my brother comes with me.

Ronnie – I was horrible and they hated me, but they had no choice. You either have a great singer and a horrible guitarist to go with him, or……… It made ,me work because I was going out and playing shows every weekend and I was tired of sucking, so worked at it. I’ve gotten a lot better.

Ronnie – It’s in the blood. My kids are doing it.

Michael – My kids are already starting it. Ronnie’s kids are very talented.

Ronnie – They are way better than I was at that age.

27. I have a favorite Metal band. I think the singer and bass player is god status. What do you think of Motorhead?

Ronnie – One of the best bands ever, man.

28. Is there anything else you would like to say?

Ronnie – Thanks for the interview and enjoy the show. Anytime.

Michael – Remember the new album in April. Part of the Black.

29. And you have a video coming up for this album?

Michael – Yes, you were there for part of the recording.

Thank you for the interview.

Michael – Was it alright?

Yes it was. Thanks !