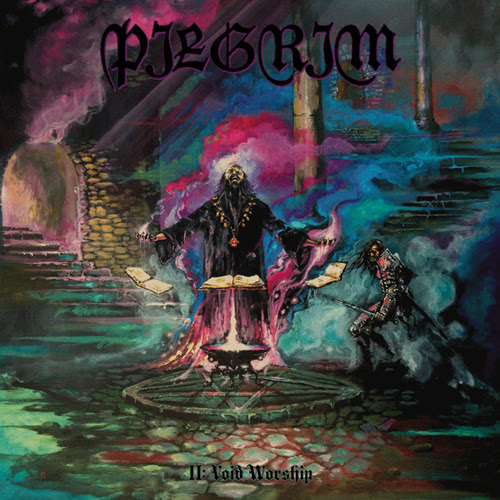 Pilgrim’s sophomore album Void Worship has a somber shadow cast over it that is likely to bring your mind to a dark place and hold it there as you bob your head to its dreary and drawn out melodies.

The introductory track sets a damn unholy mood, ultimately entrancing and appetizing but those feelings are quickly dispatched as lethargic and distant distorted chugs begin to spread like the plague. This pace is kept until the albums highlight beyond highlights, that being track three “The Paladin” is “cast out from the sky realm, from his kingdom in heaven” at us, just as the lyrics order.

Clearly in a positive place and played at a much quicker tempo is this song, radiating an energetic aura destined to lift the mood of anyone allowing their ears to indulge. The rest of the lyrics are just as uplifting, telling the tale of said paladin as he cleanses corruption that encroaches upon his people, protecting the innocent from inevitable demon sieges and serving his lord until evil itself is completely purged. While the song is a marvel on its own; it doesn’t seem to ‘fit in’ with the rest of the utterly sluggish doom-ridden tracks.

The general sound of the album consists of riffs comparable to Sabbath-esque sulking electric fuzz. The songs are generally devoid of lyrics as tracks one, four, five and seven are all instrumental. These breather tracks, particularly “In the Presence of Evil” sound as if they are brewed in hell, unearthing a spooky and swampy cryptic sound. The vocals only play a small part in the songs where they are actually featured, but the Wizard does an excellent job stuffing his horrified vocals to the brim nothing but raw straining power.

For fans of the sluggish doom genre or even stoner borderline metal - Void Worship is definitely worth sinking some time into.