SEND THEM ALL TO HELL ALBUM REVIEW
PUBLISHED: DECEMBER 19, 2014 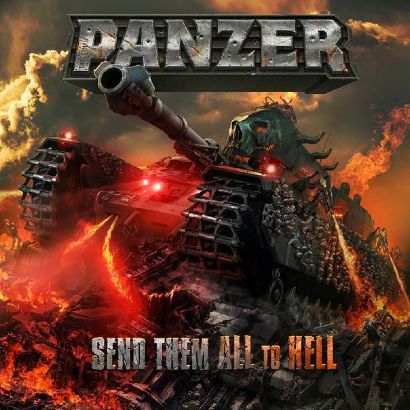 Send Them All to Hell track listing:

Members of bands that have been around for a long time forming side bands is something that I fully support as a fan and a musician. Many of those members have different reasons for going down that path, but we won't get into those. Herman Frank and Stefan Schwarzmann from Accept and Schmier from Destruction recently joined forces and formed one of Germany's best supergroups: The German Panzer, and have released their first studio album: Send Them All To Hell. With a great balance of the traditional heavy metal influences of Judas Priest and Accept, and the speed metal and punk influences of Motorhead, it's conspicuous that this is definitely one of 2014's heaviest albums. Schmier also steps out of his comfort zone vocally, taking a more melodic approach in a few areas, but still incorporates his signature yell that has become a key part of Destruction's sound.

The opening track "Death Knell" begins with Schmier whispering "Send them all to hell", followed by an onslaught of menacing riffs commanding you to bang your head. "Hail & Kill" is definitely one of the best tracks on the album, with its sledgehammer groove, straightforward but pummelling riffs and potent vocal delivery. The brutality is ceaseless, with the tommy gun riffs of "Temple Of Doom" continuing the assault of classic metal mayhem the first two tracks started off, and this track contains one of the best chorus riffs on the album. The grooves on "Hail & Kill", "Panzer" and "Virtual Collision" pummel you just as hard as the speed does on "Temple Of Doom", "Freakshow" and "Mr. Nobrain". "Panzer" is designed to be a live track with its infectious chorus, marching groove and vehement riffs. The speed is dialed back a bit more on "Why?" and "Roll The Dice" adding a dash of gloominess to the album with the Sabbath-flavoured doom-y riffs, while "Bleed For Your Sins" closes off the album with one more round of ferocity and speed. There's a huge Megadeth influence in this track, and that's not a bad thing at all.

Panzer doesn't really explore new grounds, so even though some of the riffs may sound dated, there's nothing to not like about this album, but part of me still wishes that new ground was explored on this album. However, the amount of power Send Them All To Hell contains is undeniable, and it should be an obvious choice for any metal fan. As Schmier said: "If you're a metalhead, you will love Panzer. I'm 100% sure about it." and boy was he right. With all that said, I hope my testimony will be enough to make you check out this monster of an album, and I hope you enjoy it just as much as I did.

Lows: Nothing new to offer