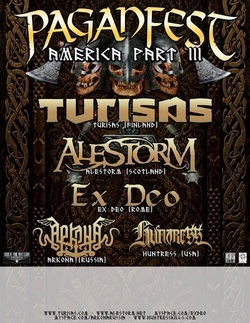 So, it’s time to chronicle my experience with Pagan Fest 2012; a great night of Slavs, Vikings, Pirates, Witches, beer and lots of good friends.

The first band up were the local Toronto band Protokult, consisting mostly of Russians and other Slavs living in this area. Their vein of Folk Metal was much like Arkona’s, with the exception of a couple of elements. They had a lot of energy and enthusiasm; they were even dressed up for the occasion! Ekaterina, their female vocalist and flute player, was just hands down amazing. I was pretty impressed.
Second band up were the Americans Huntress. They’re sort of like Judas Priest except their lead singer is a classically-trained woman who essentially becomes a succubus on stage, Jill Janus. They were, like Protokult, very spirited and passionate. While unfortunately I only know one their songs (their first album hasn’t even been released yet), being “The Eight of Swords”, with which they closed their set, I still had a blast while they were up on stage. Also, Jill Janus had a really cool translucent cape that truly complimented the whole succubus/witch looks she was probably aiming for. And yes, I’m pretty sure I know why most guys were digging them. Jill is quite the female eye candy, not to say other things. I can’t lie, I was digging them for that too; that and her voice, of course.

After a short break and my rather quick consumption of a beer, we got the Russian folk legends Arkona. I was actually surprised to see that their folk instrument expert Vladimir “Volk” was on stage with them, complimenting the already awesome performance by the rest of the band; his bagpipes and flutes were seriously among the coolest things I heard last night. Masha “Scream” Arkhipova, their lead singer, was just astounding to see on stage. She had a large drum she played in a couple of songs and a glorious wolf-pelt outfit. She moved from point to point on the stage like a rabid animal, whilst still being able to perform her great guttural vocals. She did stop moving around while singing in the traditional Salvic folk style she’s also known for. She definitely has a great stage presence. Altogether, a very solid performance with plenty of people (including myself) screaming “Slava!” (One of multiple Russian words used to say “Hail!” or “Cheers”) at the top of their lungs. The last two tunes of the set, “Slavsia Rus’!” and “Yarilo”, got me singing in my mother tongue, which caught the attention of a pair of girls who were also singing along. This gained me a fun folk dance with the ladies during “Yarilo”. Quite the experience I must say.
While I can’t remember the exact order of the setlist that Arkona had, I know they played a couple of their really great tunes, including “Goi, Rode Goi!” and the aforementioned “Slavsia Rus’!” and “Yarilo”. I am only familiar with some of their material, but I still had a blast while they played.

Another beer down and next we got the amazing side project of the Quebecois band Kataklysm, Ex Deo. I was extremely excited to see the Roman-themed Symphonic Death Metal group as this was their second and last appearance in Pagan Fest (yay for living in Canada, we get Ex Deo!), and my first time seeing them. I must admit I am a huge history geek, and due to the awesome music and lyrical themes, I got hooked right in when I heard their debut (and so far only) album “Romulus”. Of course, being the huge fan I am, I had to scream “Ave Caesar!” (in proper Latin pronunciation mind you) at the top of my lungs a couple of times when they went up on stage. The fact that they perform in Roman armor is another plus to satisfy my geekiness; the bassist and guitarists wear armor plates bearing the inscription “XIII” (referring to the 13th Legion, who was in their prime, one of the most feared military congregations of antiquity), and their lead singer Maurizio Iacono, whose breastplate had the Roman Eagle and “SPQR” (Senatus PopulusQue Romanus) inscribed on it. The set they played was rather short, with only six songs on it (including a new yet unreleased one, “I, Caligula”) but regardless, filled with passion and energy. At this point it was when the crowd finally started to really go insane; a friend of mine started the whole crowd-surfing explosion and for his valor (and being the first one to make it to the stage for that night), he got the honor to headbang side by side with Maurizio Iacono, before diving back into the crowd. Right before “The Final War (The Battle of Actium)”, Iacono incited us to transform the pit into a Roman battlefield; I’m pretty sure at this point injuries ensued. I did jump in to the battlefield though… fell flat on my ass, got kneed on the side of my foreleg and received a mild hit on the back of my head. Totally worth it though. At the end of their set, the band members high-fived us all from the stage and few lucky people caught picks and drumsticks; I did not catch any of those precious relics, but I did manage to get one of the set lists off the stage.
Their set list was as follows:
Curor Nostri Abbas
Storm the Gates of Alesia
I, Caligula
Legio XIII
The Final War (The Battle of Actium)
Romulus
I was somewhat disappointed that they did not play two of my favorites out of their songs, “Surrender the Sun” and “Cry Havoc”, but I was still very satisfied seeing the armor-clad Romans.

Another short break, and guess who we got? Christopher Bowes of Alestorm himself doing the sound check of his keytar! Quite the down-to-earth guy if you ask me. A few minutes later, well, we had the insanity that ensues seeing the pirate quartet Alestorm on stage. At this point, crowd-surfing began to really get out of hand… Not that it’s really a bad thing, but there were a couple of people who seemed to be chronic addicts to the practice (you’d see them get on and stage dive maybe three or four times per song!) and I can’t say a lot of them were wearing the most crowd-friendly shoes/boots. My face remained safe since towards the middle of set I moved a bit back towards the bar (after some dude landed on my head and I felt the shockwave all the way down to the base of my neck). Of course, I moved back to the front once more after I got my breath back. Total highlights of Alestorm’s set were “Nancy the Tavern Wench”, during which the guys from Ex Deo got on stage and brought Alestorm a few bottles of beer which they then proceeded to pour into the pirates’ mouths, and “Back Through Time”, prior to which Bowes made some hilarious anti-Viking remarks akin to those that made one of this years’ April Fools’ pranks that circulated the Internet, causing thousands of fans (myself included) to believe they were kicked off Pagan Fest due to said remarks. Also, it is worthy of mention that Rob Cranny, a local metalhead who rose to fame thanks to his presence on 70,000 Tons of Metal and the interview he got on CNN aboard the ship, got on stage (officially, not crowd surfing like everyone else) together with Alestorm and performed with them.
Alestorm’s setlist:
Shipwrecked
Wenches and Mead
The Sunk’n Norwegian
Nancy the Tavern Wench
(Enter hilarious anti-Viking remarks)
Back Through Time
Keelhauled
Rumpelkumbo
Black Sails at Midnight
Midget Saw
Rum

After another short break, we got the last act of the night, Turisas. The war-paint –covered Finns were truly a force to be reckoned. Energetic, excited, powerful and certainly very Metal. Although only running on pure adrenaline and with sore feet, all of the crowd proceeded to cheer, jump and headbang and essentially, go insane. The sheer excitement and energy got me (a guy who I can’t say is precisely in shape, and quite heavy) to crowd surf, get on stage for a couple of seconds and then dive off happily back into the crowd whilst screaming “To Valhalla! To the Gods!”. Must have been a hilarious sight, but hell, I had fun. Although towards the middle of the set, the songs did get a little dull, they kept up with their energy and freshened up things with an acoustic version of “One More”. However, the true highlights of their set, other than the war-paint and the nice violin interlude we got, were the opener “The March of the Varangian Guard” and the three-piece encore, including their cover of the 1970’s hit “Rasputin” and their classic tune “Battle Metal”. It was great to be part of the horde of warriors that gathered that night for a party worthy of Norse sagas.
Turisas’ set went as follows:
The March of the Varangian Guard
Take the Day!
To Holmgard and Beyond
The Dnieper Rapids
Messenger
Fivehundred and One
One More
(Violin Interlude)
The Great Escape
Rex Regis Rebellis
Stand Up and Fight
------------------------
Hunting Pirates
Rasputin
Battle Metal

Altogether, an amazing set. Note the first song of the encore, a pretty interesting response to Alestorm’s “Back Through Time”, I guess the red-faced Varangians had something to say about the corsairs’ faith in cannons and whores.

After hitting up the merch booth, going to pick up my coat, came the last surprise of the night. Mr. Christopher Bowes of Alestorm himself was outside the venue, having a chat and taking pictures with a couple of fans. I had the chance to speak and have a picture taken with the most feared keytar-savvy privateer of the seven seas! As I said, quite the down-to-earth guy, huge respect for going outside the venue without a coat (yes, it was pretty cold, he himself said he was freezing) to connect with the fans. And so ended six of the best hours of my life.

Now sidenotes: I was headbanging pretty much the whole night, moshed, and ran into a couple of friends, whom I’m really glad to know, and who helped enhance the already awesome experience tenfold. This was also the first Metal show a really good friend of mine went to; she decided to go all in with it. Just like a couple us, she covered her face with war-paint (yes, so did I), she headbanged, moshed and even crowd-surfed during Turisas’ set!