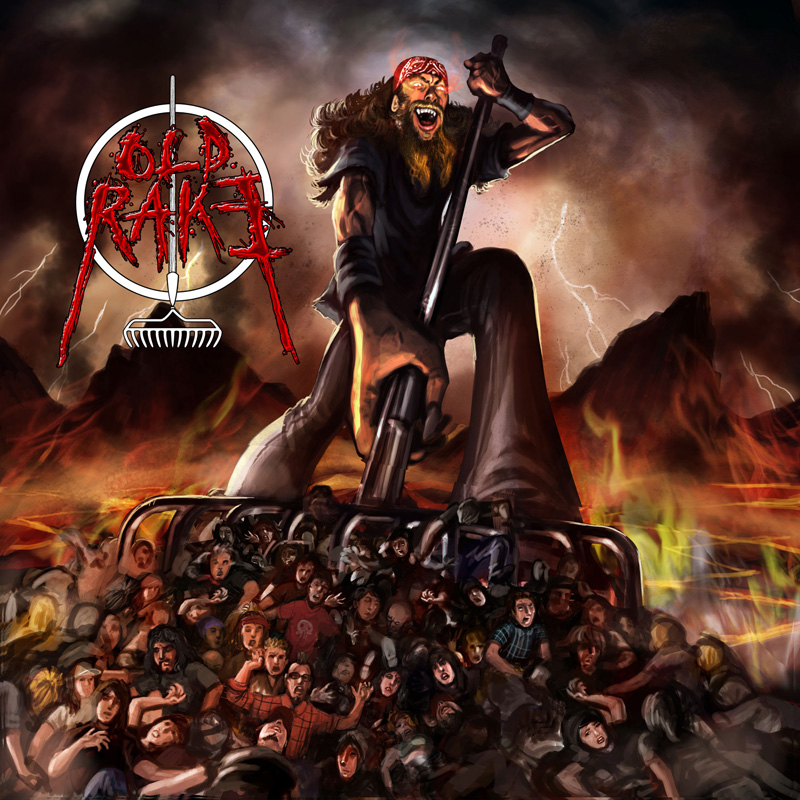 It's coming on two years since Ol Drake left Evile to pursue a solo career. Even though the justification for his departure wasn't surprising, it was very understandable.  As a fan, I was disappointed, but it's something that you have to respect.  While his departure from Evile was the dark cloud for many fans, the bright side was that he would continue to write and record music and announced that he was working on a solo album.  The anticipation for his solo album was very high and he kept giving clues as to what we could expect on the album throughout the writing and recording process.  Now, almost two years later, Ol has delivered an incredible album of variety, world-class performances and humour entitled Old Rake.  This is also the first instrumental album I'm reviewing.

From the Van Halen-esque opening track, rightfully and humourously titled "Han Valen", to the eerie closing track "An Absence", Ol showcases much of his arsenal, from the technical and chaotic shredding which made him one of the most beloved guitarists of the 21st century, to plenty of soulful and melodic licks and a few surprises that he didn't get to do in Evile.  Aside from Ol's fantastic performances, the song titles really garner a chuckle. You would think titles like "Han Valen", "Onions", "Spaceship Janitor", "I'll Be Bach (Get It?)" and "Guitarists Playing Guitars" would have been just working titles, but since they are the official titles, they represent the humourous side of the album.

There's quite a few shred workouts on the album like "Han Valen", "Spaceship Janitor", "I'll Be Bach (Get It?) and quite possibly the album's most epic track "Guitarists Playing Guitars".  Why is it so epic?  Well, because it contains guest appearances from Gary Holt, James Murphy, Amit Sharma and Josh Middleton, resulting in a shred-fest with blazing leads and catchy riffs thrown in for good measure.  I'm sure a lot of fans have expected the album to be 100% shredding and speed, but it's not and I'm absolutely glad about that.  "Onions" and "Rake Waltz" are more groove-oriented, and "Emperor" is more of a ballad-type track with its slow groove and tasty melodic lead riff.  The album is also not just electric guitar.  For proof, listen to "Karma", the album's acoustic piece.  The track has a slight Middle Eastern vibe with the soft melodies and the rhythm of the drums.

Old Rake is not only a must for guitar players, but it's a must for everyone, no matter what instrument you play, even if you don't play an instrument. Keep up the great work Ol, we all look forward to hearing more music from you in the future.

Highs:  Ol lets more of his influences see the light of day.

Lows:  None.  This is one of the best instrumental albums I've heard in a long time.
Metal Master Kingdom's Album/Song review & Photo Request submission form here. ​​