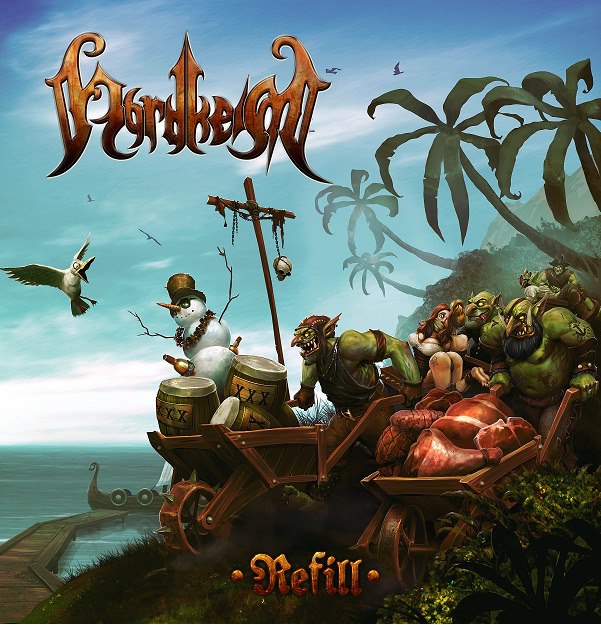 
REFILL track list:
Ov Frost & Ice
Mask Of The Banned One
Get Drunk Or Die Tryin'
Watch The Raven Die
Under A Crying Storm
The Grief
Winter's Dawn
As Shadows Pass By
Soulblood

We all need some metal to put us in a party mood once in a while, and there's no better way to go than Quebec party metallers Nordheim. The best way to describe Nordheim would be party folk metal, with a little Iron Maiden thrown in for good measure. The band released their debut album Lost In The North in 2011, and their sophomore album Refill in 2013, which this review will focus on.

It is without question that Nordheim love to put fun and comedy into their music, and their live shows portray that as well. The first track "Ov Frost & Ice" is a good example, with a spoken word intro that gets interrupted by a voice yelling "Shut up jerk, now it's time for metal!", leading into a melodic intro accompanied by black metal style riffing. Track 3 "Get Drunk Or Die Trying" contains a similar musical vibe to the track "Beer, Metal, Trolls & Vomit" from the previous album, with a jolly keyboard melody and compelling riffs. As silly as the title may sound, and as ridiculous as the lyrics may seem, this would have to be probably my favourite track on the album.

"Watch The Raven Die" is another highlight, where the track contains a classic heavy metal vibe with the heavy blues beat (a beat that drags out the best vocal melodies). The dark choir vocals give the song a haunting vibe. Even though "Soulblood" is the closing track, it's the track that encompasses everything that is featured on the album, and it’s perfectly fitting for the closing track to do so.

The imperfection about Nordheim is most of their lyrics. I understand that they want to have fun with the lyrics, but some of the lyrics are a little too much on the ridiculous and immature side, but they're more tolerable than Steel Panther's lyrics. A majority of the tracks also don't hold their own uniqueness, so some of the tracks get a little hard to recognize.

Aside from the imperfections, this album is the definitive choice of a soundtrack for a metal party with tons of alcohol, food and jokes. Nordheim is definitely a band for fans of Ensiferum, Turisas, Eluveitie, Wintersun and Amon Amarth.