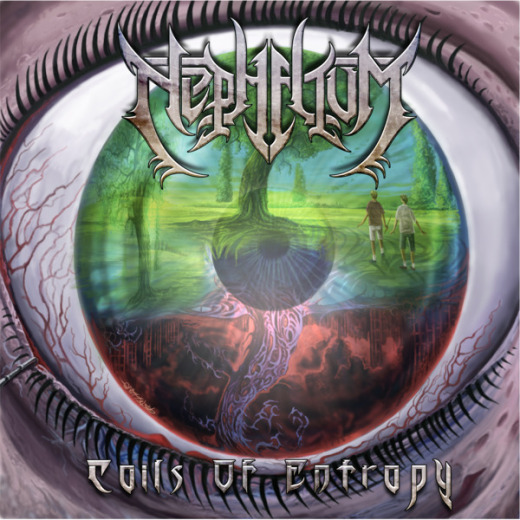 While known for being the front man of Bullet For My Valentine, Matt Tuck is also a huge fan of aggressive metal. I have a distinct feeling that Matt wanted to write some music that was even more aggressive and punishing than most of Bullet's aggressive material, but it wouldn't be a good fit for Bullet. In late 2011, he mentioned in an interview that he was working on a side project that he described as "Metal As Fuck" and has the influence of Slipknot and Pantera. The project was confirmed to be called AxeWound and it features musicians that are already in highly respected bands. The band's lineup is rounded off with Liam Cormier from Cancer Bats on lead vocals, Matt Tuck on rhythm guitar duties and does much of the clean vocals and occasional aggressive vocals, Mike Kingswood of Glamour Of The Kill on lead guitar, Joe Copcutt, formerly of Rise To Remain playing bass, and Jason Bowld of Pitchshifter on drums.

Matt and Jason did some jamming in late 2011, and because the chemistry worked so well, they wrote an entire record and decided that they should start a new side band aside from their respective bands. While 4 out of the 5 members are British, Liam is the only Canadian in the band. Ever since the project was mentioned, it was kept kind of quiet until in May 2012, the band revealed all their info and released the first single "Post Apocalyptic Party". Matt originally said he didn't want to do any vocal work in AxeWound, but later changed his mind. He brings the occasional aggressive vocals btu does a majority of the clean vocals that Bullet fans have come to know and love over the years. The debut album was later confirmed to be entitled "Vultures".

The album's opener is the title track, and has Slipknot written all over it with Joey Jordison inspired drumming, as well as Jim Root and Mick Thompson inspired riffs. When you think of Slipknot, you think of violent, balls out, no holds barred metal, and that's exactly what the listener will get with the title track and a majority of the tracks on the album. The title track also features Synyster Gates from Avenged Sevenfold doing a guest guitar solo, which I believe is the best solo I've heard Gates do, and outshines most of his solos in Avenged Sevenfold. Some of the lyrical concepts may seem a little strange, but that's what makes so many metal songs so cool. "Post-Apocalyptic Party" talks about a party that takes place on the day the world's end. The album's second single "Cold" had a music video shot for it. It features bludgeoning screams in the verses from Liam and melodic vocals in the chorus from Matt.

The album's third single "Exorchrist" is a song about Satan, and has a Pantera feel to it. The concept of Exorchrist is about a reverse exorcism, which I'm not quite sure how that works, but it ended up being a cool funky concept that turned into a killer song. Track 7 entitled "Collide" has a bit of a different approach, with the beginning starting off with piano and features a string section, and Liam sings in a melodic voice in the verses. I think this song sort of threw me and a few other people for a loop because it's a slower song, but it still has the heaviness. It's not a bad track at all, but I don't think it really fit the album. This is probably the only down-side about the album. The short but epic drum fill that starts off track 8 "Destroy" is without a doubt earth shattering. When you hear Liam yell "It's time to crush this world", you feel the beast inside you being summonded, then you hop into the pit and CRUSH! The album's closer "Church Of Nothing" starts off with some funky drum and bass licks before a funky lead from Mike Kingswood comes in, then the song bursts into a nuclear attack of brain-busting insanity in the verse. It's like the culminating track because it features just about everything featured on the album all in one track.

Bullet For My Valentine have three studio albums out so far, with a fourth coming out late 2012 or early 2013. I wasn't a real big fan of Bullet albums 1 and 3. Their second one is their masterpiece. Albums 1 and 3 had some great moments, but the other moments on those albums didn't appeal to me. I'm glad that Matt Tuck started AxeWound to reveal the other side of him because as we all know, Bullet is a metal band, with some aggressive songs and moments, but they have incorporated a lot of hard rock into their music, especially on their last album, and Matt wanted to do more but it wouldn't fit the Bullet formula. I will always remain a fan of Bullet For My Valentine, but I'm glad that we now have AxeWound as well. With Cancer Bats, my favourite Bats album is their sophomore album from 2008 "Hail Destroyer". Some of the songs on Vultures also have a bit of a Cancer Bats feel to them. I definitely cannot wait for the next AxeWound record, hopefully out sometime in 2014.

Highs: The mixed influences of Slipknot and Pantera on the whole album

Bottom Line: I recommend this album to any fan of Bullet For My Valentine and Cancer Bats respectively, but to any fan of metalcore and groove metal. You will not be disappointed.

Every year throughout the world there are countless numbers of new bands, and just as many new albums released. But it’s not every day that your able to find a good band such as the desert sons, "Nephelium ",  and their album "Coils Of Entropy".

Nephelium was formed initially in UAE- Dubai as an  old school death-metal band in the fall of 2001, but since then they have created a new start in Toronto. They have changed their style a bit into more of a Brutal/Technical Death Metal, and released their first full-length album "Coils of Entropy”. This album is loaded with lots of variations and changes, but has many catchy riffs throughout the songs.

Even though Nephelium members are sharing the same goal, every one of them is trying to show his abilities and talent in a professional way, so I guarantee you'll be listening to band dose not like any specific band sound  you've heard before.

From the beginning the album starts with aggressive double bass courtesy of Nepheluim’s drummer "Alan" which carries you right into the opening track "Burial Ground "
Alan’s playing style can best be described as a drum machine! Fast drumming, accurate rolls, impeccable timing, and great use of the double bass where needed.

One of the things that made me classify this album as one of the most skillful albums of 2012 is the four brutal techniques that the band used in every track of this album. The vocalist will one day be one of the best brutal death metal icons sooner than later.

It would be unfair if I didn’t talk about the hard work on the guitars, truly, the riffs do not copy any other band, it has been written carefully to reflect the talent of this band.

Come unleash the spirit of death metal in your soul and go check this album, it’s really worth.