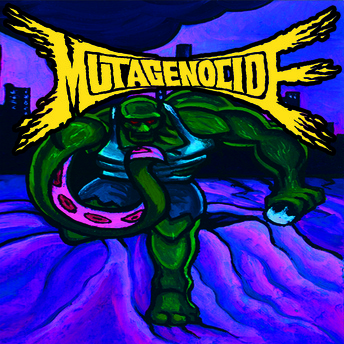 Mutagenocide is a five-piece from Oxford / Witney, Great Britain.
Their initial release, "Mutagenocide," is an EP available wholly on YouTube, but you'll want a copy if for no other reason than to support this group of extraordinary, technical thrashers. The EP begins ominously, introducing the listener to  Mutagenocide's unique musical outlook through wailing guitars, siren sounds and  unconventional, aesthetic-driven rhythm. The beat drives hard throughout the opening track, weaving together intricate and tough-sounding riffs, clear vocals, falsettos and gutteral vocals to lead the song, reminding one of Toxik and Belgian speedsters Warhead.

As the EP unwinds, one recognizes a high level of fluidity, maturity and unity in the  songwriting. The only problem, if you could call it that, is that these songs seem to have been written with an economy of time in mind. There is a LOT of heavy metal that is compacted in to small frames of time. Though the opening track is seven minutes, the remainder of the songs do not seem to exceed a standard pop song's length. This is unfortunate, but it also works out in a way for the listener and the band alike, as you may be left insatiable for more output from this band.

The entire work is alive with sweet soloing, off-time, technical expertise, multifarious vocalization and hardened steel. Mutagenocide never veer too far in to experimental territory with this EP, though this group easily could, given the respective, prodigious talents of each of its members. With "Warhead," the EP's final song, the band displays  epic song construction with commanding leads, drums and bass that have, at least initially, the sound of a stilt walker descending many flights of stairs with effortless speed and grace and almost Sabbath-esque vocalizing, which is quite an awesome thing if done, as it is here, correctly. The overall sound of this first release is as if Atheist and Pantera were to have a child and name it Mutagenocide. One certainly doesn't mean to suggest that the band is a carbon copy of those seperate bands or elements; M'cide is a unique and deadly animal. The "Mutagenocide" EP is a work of technical, thrashing excellence.