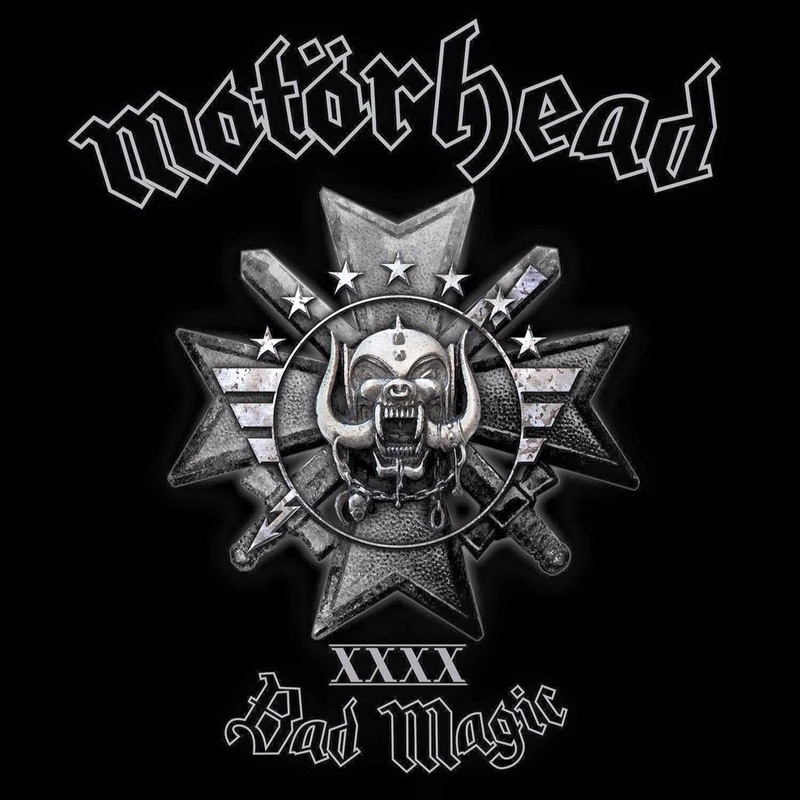 Motorhead have had a bumpy road the last couple of years since the release of their last album Aftershock in 2013 due to Lemmy's health scares, which have caused them to cancel several shows and tours and cut sets short, but they have wasted no time during their breaks from the road as they kept the creative juices flowing and recorded album #22, which is also considered their 40th anniversary album: Bad Magic.  It's been well-known for years that with Motorhead, you know what you're getting, there's no experimentation to be found on any Motorhead album.  The only thing you're getting is fast, dirty and boisterous rock n' roll.

The record starts off with the back-to-back aggression of "Victory Or Die" and "Thunder & Lightning", then heads into more traditional rock n' roll territory with "Fire Storm Hotel".  Lemmy has lost nothing on his voice.  His unmistakable vocals shine brightly on this album.  Lemmy adds some darkness to his vocals on the chorus of "Evil Eye" and "Choking On Your Screams".  The darker vocals over top of the heavy grooves put a big smile on my face.  Ballads almost seem unthinkable with Motorhead, but their ballads are very well executed and it's proven once again on "Til The End".

Mikkey Dee keeps on proving why he's the best drummer Motorhead ever had with his furious drum intro on "Shoot Out All Of Your Lights" and Phil Campbell never stops coming out with pummelling riffs.  The record closes with a great cover of Rolling Stones' "Sympathy For The Devil".  You don't hear Lemmy try to emulate Mick Jagger, but he put his own spin on it, and the result is excellent.

There are some flaws found on Bad Magic unfortunately.  The riffs on "When The Sky Comes Looking For You" feel very bland, and the intro in "Tell Me Who To Kill" sounds identical to the main verse in Metallica's "No Remorse", and it just doesn't work.  Besides these minor flaws, Bad Magic still contains plenty of memorability.

Lemmy's health may cause Motorhead to scale back from touring, but it's evident that by the greatness of Bad Magic, Lemmy, Phil and Mikkey still have plenty of music left in them for future albums.  They are Motorhead and they play rock 'n' roll.

Lows:  "When The Sky Comes Looking For You" and "Tell Me Who To Kill".