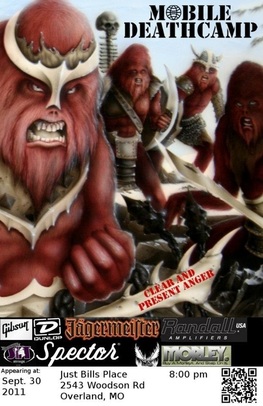 Metal friends, I went for a night out with Kelly Kruel to Phoenix Hill Tavern in Louisville, Kentucky for a night of Metal. We did not expect what we encountered at all. There was a huge Halloween parade occurring on Bardstown Road that created a lot of havoc. We had to fight our way to the venue. First it was a helluva battle with other cars to find a place to park. We managed to find a parking spot in a distant alley. Then next we had to cross Bardstown Road, dashing between two floats and about 20 costumed parade participants accompanying those floats. Finally we pushed and shoved and made our way along a score of crowded city blocks to finally arrive at The Hill. The doors were open but the show hadn't started yet, so we stood out front and watched the rest of the parade roll by.

Next to me stood a huge guy, quite a pleasant person, who chatted a while with me. He introduced himself to me, telling me his name was Todd and that he played guitar for a band that was playing that night. He was a very humble man who shook my hand and thanked me for my military service.  Little did I know at that time that I was talking to Todd Evans, former Beefcake The Mighty of GWAR, and the guitarist and vocalist for Mobile Deathcamp. That friendly encounter led me to the following interview.

Me: First of all, I'd like to thank you on behalf of myself and Metal Master Kingdom for this interview. Todd, I had no idea when I first talked with you outside Phoenix Hill Tavern that you were Beefcake the Mighty for GWAR from 2002 to 2008. Why did you help form MOBILE DEATHCAMP in 2007 and then leave GWAR?

Todd: I'm a guitar player first, I was asked to join Gwar on bass and couldn't pass it up. They (Gwar) had been a favorite of mine for a long time. Was a great opportunity, and a genuine blast! After a couple albums and several tours, I decided it was time to go back to guitar, and get back to speed metal... which is, and has been my favorite style of music since its inception. Yes, I am THAT old! =)

Me: Dave, forgive me, but I know very little about you. What type of music did you play prior to joining MOBILE DEATHCAMP, and what other bands have you performed with? And how did you get involved with MOBILE DEATHCAMP?

Dave: Bob, Nobody knows very much about me, I'm like Ringo....

Prior to joining MD, I spent four years in an Alt-Country band call Wilbur Shaw. We basically started as
an Uncle Tupelo cover band, but ended up writing an album's worth of originals before disbanding. In
addition to WS, I had been playing pick-up gigs with local jazz bands and bar bands. I was, and still am,
available as a fill-in for any local band that needs a drummer for a gig.
In the past few years, I have also played in:

-Tracer, a shoe-gazery indie rock-ish band that was heavily inspired by Mazzy Star. I started this band with a couple friends and we lasted a little over a year, and we recorded an LP before the guitar player quit.

-NRR, a hardcore-punk band. I filled in on drums for a few months after they lost their drummer, until they found the drummer they have now.
I work at Guitar Center, and I essentially got to know Todd and Boe as customers. Todd was still in
GWAR and Boe was in Habitual Coercion. Over the years, I would chat with them whenever they came
into the shop. When Todd decided to form MD, I was one of the drummers he originally asked, but I had
to decline because I was playing in so many bands at the time. Three years later, when Cracker
departed, I got ahold of Todd and asked him if I could audition.

Me: How did you become associated with promoter MJ Roxx Newman?

Todd: We met online, she sent a message to the band's website inquiring about us playing in Kentucky

Me: It's been a long time since I was in Toledo. The last time it was during a horrendous snow storm and I had to abandon my car on I-75 and spend 5 days shacking up with hundreds of strangers in the gymnasium of a local high school. Prior to that event, I used to visit my sister in Toledo and there was not much of a music scene there that I was aware of.  What is the music scene like in Toledo, now? Are there many venues that cater to Metal music and do you have big turnouts for your hometown shows?

Todd: I wouldn't even say the term "scene" even applies to Toledo. Actually, that term doesn't really apply itself to many towns around the country anymore. Sure, there are countless bands all over, but, an actual "scene" implies all the bands and all the fans of live music, will turn out and support as many shows as they can. You can blame the economy, you can blame the sun... the real blame lies with apathy. "Scenes" don't mean anything anymore... if people dig your band and it's promoted properly, your crowds will show it.

Me: Your music certainly is exciting and conducive to banging one's head from the moment the first song begins until the end of the last song. What's it like playing on stage? Tell about the feelings you have during your live performances?

Todd: Well thanks for the kind words, man! I absolutely live for the live shows... there's a strong feeling of invincibility, which is ridiculous really... haha!! I guess it's because the intensity level is so high, combined with the fact that I'm so moved by our music... ugh, sounding pretty conceited now. The hour or so spent on stage, is my favorite time in life. Playing live is the reason we keep chasing this elusive musical dragon. It's the reason everything else has been, and remains to be put on hold. The most unreasonable thing I've ever done, is trying to be in a band. However, I wouldn't change it out for anything.

Me: I went to a show one time where the band that played was great and nobody in the audience got involved in the music. Have you ever performed and everybody just sat or stood there staring at you? If so, how do you get an audience involved and, if not form a pit, at least bob their heads in time to your music?

Todd: Haha, yes... everyone in a band has played shows like that. I've even played shows where there's literally no one in the room, even the sound man stepped away. We still rocked the stage like there was 800 people goin bonkers in the room. Regardless of how many people are, or are not there... you have to go off like it's a packed house.

Me: What are some other well-known bands you have shared the stage with?

Me: How often does MOBILE DEATHCAMP perform?

Todd: We like to get out on road and stay out... true  road dogs, this unit is! We averaged almost 200 dates per year, first 3 years of band.

Me: Have you toured outside the United States?

Todd: Yes, we've gone coast to coast in Canada. Nothing overseas just yet, BUT, Europe beckons... and let's face it, THAT'S where metal reigns!!

Me: What are the circumstances of your involvement with Turkey Vulture Records?

Todd: Circumstances? As far as I know we're not with them anymore. Why, you know some REAL labels that are interested?

Me: Hah! Okay. Well, I'm not working for any labels, but I know people who know people, so I'll ask around. Your music expresses some anger, which is something that I find resonates well with me. Your subjects deal with society in general, war and American Indian Pride. Please tell me more how the last subject has found its way into your message.

Todd: Well man, it's metal... speed metal, at that! The music MUST be angry and aggressive. We keep the music Yang, and the between song banter, Yin.   The American Injun pride comes from my heritage... I'm of Cherokee descent, and try to live a peaceful existence with the Earth.

Me: And now, are there any other things you'd like for your fans and future fans to know about MOBILE DEATHCAMP?

Todd: www.MobileDeathcamp.net     Stay up with us online... come out and see us when you're able. Support metal, if that's your thing. Be good to one another, and the planet... and finally, DEATH TO FALSE PIZZA ! !

Me: Thank you for this tremendous opportunity to interview MOBILE DEATHCAMP

Much Metal Love, Sisters and Brothers.