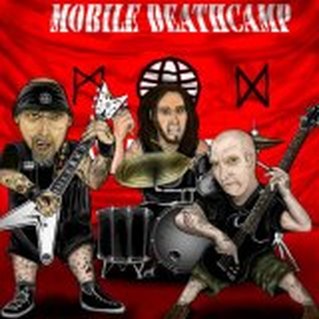 Ramblings about MOBILE DEATHCAMP: Their recent show I attended, their music and other things. I had some questions for MOBILE DEATHCAMP that I didn't think of when I interviewed them last fall, plus I had some new ones as well. I think it will work better this time for me to use a less formal approach and just tell you some of the things I learned from MOBILE DEATHCAMP this time. First of all, the band has a new drummer. His name is Chad Smith. He's played with these guys before, but not in MOBILE DEATHCAMP. It was time for the previous drummer to take a different path, and conveniently at this same time Chad was free to jump in and join MOBILE DEATHCAMP. He wasn't a Speed Thrash drummer, but he is now, for sure.

I had the great pleasure to see another performance of MOBILE DEATHCAMP on June 5, 2013. It is very humbling to me that I could walk up to these guys and they remembered me from last year at one of their shows. Even more humbling is their willingness to take some time to chat with me as well as autograph not only some photos I took last time I saw them, but a photo for a friend of mine as well, plus the added bonus of an autographed tour poster. And Princess and I bought a couple of band tees and the first CD as well. We would rather buy and wear the tees of the not so famous and independent bands than give more money to the big arena bands .Those bands have it made already. The smaller bands can use the help getting to the next show to spread their love of Metal further.

MOBILE DEATHCAMP has a song from their second album,  Clear and Present Anger, titled, "Point Taken"....it's a song that begins, in live performances, with  the awesome Todd Evans (his introductions to songs remind me a great deal of Peter Wolf. Some of you might remember him) speaking about some dumbass who stumbled upon a castle, as he was on his quest to take over the world....and was unexpectedly exposed to 20,000 people impaled upon stakes in the front yard...that's right...20,000 human popsicles....and a reminder here...don't be a human popsicle, it's not cool.... anyway, this is how the name of this summer tour came to be for MOBILE DEATHCAMP...and it would have been even cooler if IMPALER was able to be on the tour with them for more than a couple shows...get it...Human Popsicle...and IMPALER...of course you do.

I feel the need to say a few things about Lexington, KY and promoters in general around here. There are plenty of metal bands around here. There's a pretty damned good one that practices a couple miles down the road from me in the middle of no place, KY. But small venues in Lexington do not advertise well, they don't always provide opening bands for bigger, traveling bands such as MOBILE DEATHCAMP. And promoters, what is it about promoting shows that gives you such trouble? Just posting on Facebook isn't going to get the job done. Posters. Put up posters on walls, telephone poles, do some footwork so more people know about shows. This is a complaint I’ve not only heard locally, but from Boe as well the other night. Local bands can, if they make the effort, distribute posters, but a traveling band, that’s not something they can do in advance. I talked with a tour manager the day after I attended the MOBILE DEATHCAMP show. He told me that this state, Kentucky, is becoming a place that bands are finding it just a necessity to pass through on their way to another show. It would be great if a lot of these bands would stop off here and play a show or two, but the environment isn't exactly the most band-friendly. The people who book the bands for the show, follow up, won't you? There were to be bands to open for MOBILE DEATHCAMP and none showed up. Sure, I strictly attended this show to see MOBILE DEATHCAMP, but I would have enjoyed an opening act if the band was any good at all. MOBILE DEATHCAMP was left to carry the load and fortunately for me, they did that very well.

With that said, MOBILE DEATHCAMP put on a stellar performance Thursday night at Cosmic Charlie's just as I knew they would. We were not a packed crowd. However, MOBILE DEATHCAMP didn't let that dampen their spirits at all. I talked with the band members backstage before the show and they tell me they are used to life on the road, playing to big crowds and playing to not so big crowds and even playing one time when there was no one at all in the audience. It's a rollercoaster ride, but no matter. They play the best show possible no matter how many people show up. They have only one level of playing and that level is the best ever at all times.

There's no need for a rhythm guitarist. There's no need for a keyboardist. There is only the need for Todd, Boe and Chad. This is a forceful and energetic trio. They write and perform Speed Thrash. What else could they be onstage then? They play their Metal loud and proud and they play like a band that is a tight knit family, each member knowing what the other is going to do on stage. Put plainly, MOBILE DEATHCAMP kicks massive Metal ass!

Todd Evans improvises from time to time the intros to songs and the between song chatter with the audience. Stripped down, heavy Speed Thrash Metal...it doesn't get any better than MOBILE DEATHCAMP.

What if these guys weren't musicians? What would they be? Boe would be a pro golfer. Chad would be a bum. Todd would be a hobo, no, a football coach.

How many readers know bands where one or more of the members drink alcohol while performing? I do and most of the bands I know have a tendency to imbibe prior to a performance. Well, MOBILE DEATHCAMPdoes not. They are an alcohol/drug free band and I commend them for this. It is manifest in the consistency of their performances. Always professional and dynamic, MOBILE DEATHCAMP does not disappoint.

At the end of their performance Todd sang a short little song about Kentucky. It's a song he learned from a beloved relative who is no longer with us. He says he sings that song every time they cross the state line into or out of Kentucky. It helps to keep the memory of this fond relative alive.

MOBILE DEATHCAMP is on the road often. Chances are they will be at avenue near you sooner or later. Probably sooner with the way they travel from town to town, winding throughout the United States and Canada. When they show up you should show up and Metal It Up!

Much Metal Love, Sisters and Brothers!
Mobile Deathcamp tour dates can be viewed here or check the poster below. 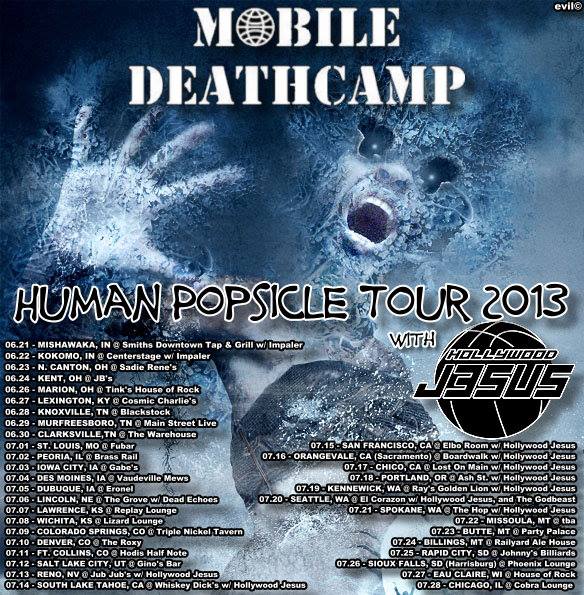