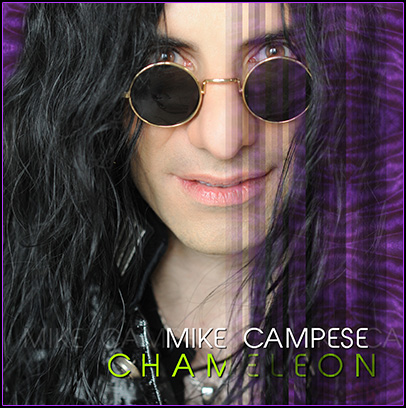 Mike Campese has released his 8th studio album Chameleon on September 17, 2013, and it has something for everyone on it. Before doing this review I knew of Mike and his work, but had never really listened to it. What talent!

Chameleon has 12 tracks of magnificent guitar work on it. Starting with “To the 9’s” which makes a sudden impact with the incredible shredding, then moving onto “Chameleon” which tones it down a bit and brings you on a more melodic ride with some vocals added. The transition from one track to the next is pulled off brilliantly. One of the biggest standout tracks on the album is “Pasta and Bananas”. It was that one song that I had to go back and listen to again. It starts to get a little heavier (which I am a fan of) and it just hits the spot for me. It gave me that chill up my spine. Tracks like “Firefly In A Bottle” and “Meant To Be” have more of a jazzy feel to them with some very catchy melodies. Overall it is a great listen.

Production was done extremely well. Mike Campese has just an unspeakable amount of talent and has accomplished so much from his solo work to his work in the Trans-Siberian Orchestra, guitar lessons, and being featured in multiple guitar magazines.

Want and need a good listen? Like hearing the skills of a guitar player? Check out Chameleon! Looking forward to checking out more of Mike’s work and also for what he has for us in the future.