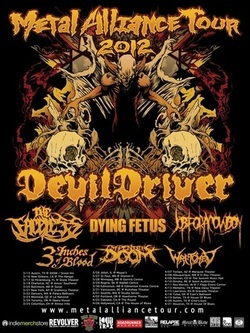 What’s going on headbangers?! Chris here for a review of the Metal Alliance Tour that took place at the Opera House (Toronto) last night.

The bands playing on this tour were: DevilDriver, The Faceless, Dying Fetus, Job For A Cowboy, 3 Inches Of Blood, Impending Doom, and Wretched.

Now before I get into this review I should mention that I was going to this show to see DevilDriver, Dying Fetus, and 3 Inches Of Blood, the other bands I was never into or never heard of them before.

ON TO THE SHOW!

Wretched and Impending Doom I wasn’t a fan of so I wasn’t really taking note on their performance, plus I was hanging out with friends most of the time. But from what I saw they were entertaining.  3 INCHES OF BLOOD (proudly Canadian)! I’ve been waiting quite some time to see this band, I’ve been listening to them for about five years or so and I was really excited to see them live for the first time.

I also got a chance to hang out with the lead guitarist before the show which was f*cking incredible, probably the nicest guy in a band that I’ve ever met which stands to reason (he is Canadian after all). He was also talking to us about their latest album entitled “Long Live Heavy Metal” and how it’s his favourite album they’ve recorded, it’s a great album and I encourage everybody to check it out!

Their lead singer Cam Pipes is one of the few vocalists I know who can match his vocal performance live with what he does in the studio. On a side note my buddy saw him after the show at their merch booth watching the hockey game on his phone, you know you’re in a Canadian metal band when!

God Of The Cold White Silence

Next up was Job For A Cowboy. Now I’ve never been a fan of their music, but from what some of my friends have told me they abandoned their deathcore sound and are now straight up death metal, so I thought I would stick around and have an open mind… I was really disappointed, to me it wasn’t anything impressive but I’ll give them this they’ve definitely improved their sound, but I’m still not into them what so ever. My buddy thought they put on a really good performance so hey, to each their own!

Dying Fetus was next, and there’s really not much to say about them other than THEY KICK F*CKING ASS! I’ve been a fan of them for a while now and this was my first time seeing them, I was so impressed with their performance! The whole band were killer live and kept their sound tight and brutal, plus the pit for them was pretty f*cking insane!

Your Treachery Will Die With You

From Womb To Waste

One Shot, One Kill

Praise The Lord (Opium Of The Masses)

Kill Your Mother, Rape Your Dog


After them was a band called The Faceless. I never heard of them until I found out of their performance on this tour, they were fairly entertaining live, the whole band were quite enthusiastic on stage and they would give the Vulcan sign of “Live Long and Prosper” to the audience (to the Star Trek fans reading this they’ll understand it).

FINALLY DEVILDRIVER!!!!!!! This was my second time seeing them live and holy shit I’m always so impressed with their performance! From start to finish they just tore the f*cking place apart and showed everybody what it means to be at a metal concert! I was at the front of the barricade for them and their rhythm guitarist Jeff Kendrick was in front of me, the whole night he was singing/headbanging with me and either staring at me with demonic eyes or giving me the devil horns. After their set he got off the stage and personally gave me his wristband (with the band logo on it) and his guitar pick, IT WAS SO F*CKING AWESOME! I also got a chance to meet the band before the gig for a couple of minutes and got my copy of their latest album “Beast” signed by them and a picture with Dez Fafara their lead singer.

End Of The Line

The Fury OF Our Maker’s Hand

I Could Care Less

Head On To Heartache (Let Them Rot)

Not All Who Wander Are Lost