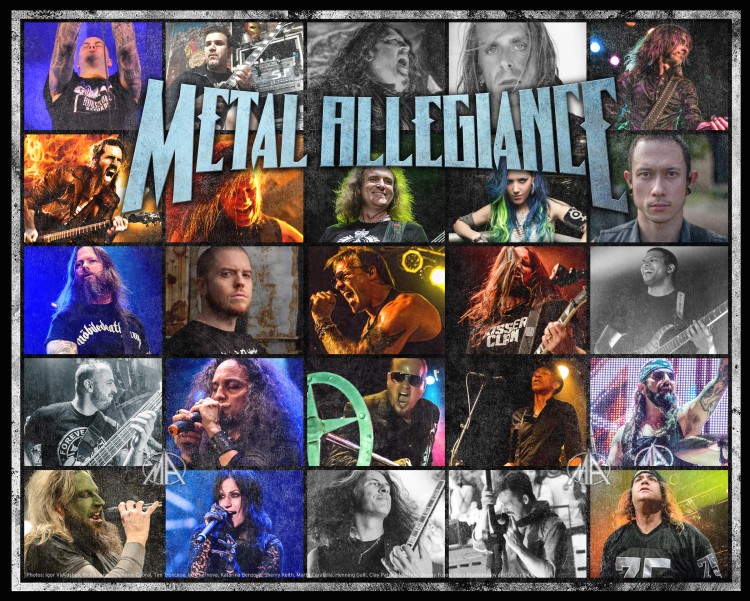 It's always exciting as a fan to see different musicians from different bands jamming together, whether it's playing live or writing and recording an album, and that's one of the reasons that led to Metal Allegiance being born.  Metal Allegiance came to fruition in 2011 as a live event with a slew of hard rock and metal greats getting together just to have fun and play music.  In May of this year, it was announced that an album of all original material, composed by core members: Megadeth's David Ellefson, Testament's Alex Skolnick, Winery Dogs' Mike Portnoy and Metal Allegiance founder Mark Menghi was coming, and if that wasn't enough to get you excited, the list of special guests fueled the anticipation more.

When you have Ellefson, Skolnick, Portnoy and Menghi, along with guests: Phil Anselmo, Charlie Benante, Chuck Billy, Randy Blythe, Phil Demmel, Alissa White-Gluz, Matt Heafy, Gary Holt and Jamey Jasta just to name a few, all on one album, how could you not get excited?  Skolnick and Portnoy play on every track, and Ellefson is on all, except for one and Menghi is on two tracks.  Diversity is paramount to an amazing album, and with a number of different musicians putting their stamp on this album, it's a musical journey.  The album showcases the evolution of metal with different tracks representing different eras of metal.

For those who love thrash like me, there's a few thrash tracks on the album.  The record starts off aggressively with "Gift Of Pain" featuring Randy Blythe (Lamb Of God) on vocals and additional lead guitar by Gary Holt (Exodus/Slayer).  A very riff-oriented track, I think guitar players will have fun playing this song.  There's a huge groove in the middle section as well.  "Can't Kill The Devil", with Testament's Chuck Billy on vocals, may be the closest thing we'll get to a new Testament song until their new album arrives next year, plus there's two key members of Testament on the track (Billy and Skolnick).  The track also features additional lead guitar by Phil Demmel (Machine Head) and Andreas Kisser (Sepultura).

Two tracks are duets.  One is "Scars", featuring Mark Osegueda (Death Angel) singing alongside Cristina Scabbia (Lacuna Coil).  Mark brings the aggressive side, and Cristina brings the angelic and operatic side, and the two together add some pretty potent harmonies.  The other duet is "Wait Until Tomorrow" featuring Dug Pinnick (King's-X) and Jamey Jasta (Hatebreed) on vocals.  It's hard not to have Alice In Chains or Layne Staley in your head when you hear Pinnick's vocals.  Portnoy adds some backing vocals, making the harmonies reminiscent of Staley and Jerry Cantrell, while Jasta provides the aggression with his signature barking vocals.

"Let Darkness Fall", which features Troy Sanders (Mastodon) on vocals with additonal screams from Randy Blythe and additional bass from Rex Brown and Mark Menghi, heads into more groove territory with a riff that's very reminiscent of Testament's "Into The Pit".  Skolnick, being the versatile guitar master he is, performs an incredible Latin influenced acoustic solo during the lengthy instrumental section of the track.  The throttle is pulled back on "Dying Song", featuring Phil Anselmo (Down/ex-Pantera) on vocals, giving a big Black Sabbath-meets-Pantera vibe with the haunting vocals, but gets heavier in the middle.  This is the only track that David Ellefson doesn't play on.  Instead it features Mark Menghi on bass. "Destination: Nowhere" sees Matt Heafy (Trivium) handling both vocal and additional lead guitar duties alongside Skolnick, Ellefson and Portnoy.  As a longtime Trivium fan, it amazes me how Heafy keeps progressing and improving as a vocalist.

The album heads into progressive territory with the multi-part instrumental "Triangulum: I. Creation II. Evolution III. Destruction", which features a lead guitar ensemble of Alex Skolnick, Misha Mansoor (Periphery), Matt Heafy, Phil Demmel, Ben Weinman (Dillinger Escape Plan), Ron 'Bumblefoot' Thal, and Charlie Benante (Anthrax), who gets to showcase his guitar skills.  The track is also the lengthiest track on the album, clocking at just under 8 minutes, and it's another track I think guitar players will enjoy.  "Pledge Of Allegiance" with Mark Osegueda back on vocals, closes the album with one more round of classic thrash in the style of Kill 'Em All era Metallica.  If all the great music on the album wasn't enough, on the deluxe edition, there is an excellent cover of the Dio classic "We Rock", which features Skolnick, Portnoy and Ellefson along with guest guitarists Kisser, Holt and Demmel, as well as guest vocalists Osegueda, Chris Jericho (Fozzy), Tim "Ripper" Owens (Charred Walls Of The Damned/ex-Judas Priest), Alissa White-Gluz (Arch Enemy), Chuck Billy and Steve "Zetro" Souza (Exodus) all paying tribute to the late great Ronnie James Dio.  (R.I.P Ronnie).

One factor about the album that is noticable and really stands out is that the whole album is performance-based where you can hear every little nuance in the riffs, drums, vocals and bass, giving you that classic record feel, which is what I love to hear, especially as a musician.  There's definitely a bright future ahead for Metal Allegiance, proven by the fact that they're already in the process of writing album #2 and more shows are planned.  We all look forward to future Metal Allegiance music and shows!

Highs:  With several eras of metal represented, there's something on the record for everyone.

Lows:  If you're looking for a more extreme song(s) (death metal or black metal) on this album, you're not going to find it.
Metal Master Kingdom's Album/Song review & Photo Request submission form here. ​​