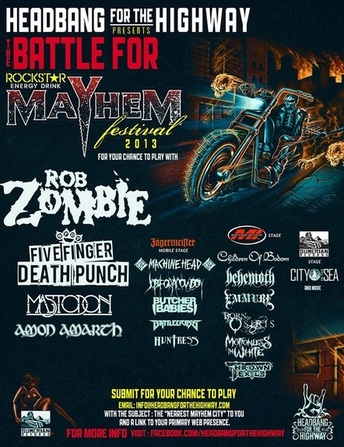 As we arrived on scene at the Mayhem Festival, like a good journalistic crew always does, we began to interview concert goers. You know, in order to get a sense of which band performances that people came to see. Who was the band that the state of Florida wanted to see the most? As the answers came in I was quite surprised that many of the people I interviewed were not really interested in the side stages as much as they were in the main stage. I really couldn't quite understand this as  there were some serious up and coming bands on those side stages. And for those don’t know where I’m coming from, well it kinda goes like this:

Getting any slot on a major festival touring the US you have to be good. This means that these guys are amongst the elite. And most importantly any band that has ever had the honor to play the main stage had to come up through the side stages first. So to a music enthusiast like myself, the side stages are where the magic happens. It’s a beautiful thing to watch a band break. To see all that hard work and effort, come to a head. These guys are hungry, appreciative and soaking up every minute of it.

I will say this about Tampa and the thousands of Metal loving Hordes that descended onto the Mid Florida Fairgrounds. I couldn't have spent my time with a better group of people. They were excited, had taken time off of work, some quit their jobs to be there, and most importantly had come together for one reason; to check out some KICK ASS MUSIC FOR SOME KICK ASS PEOPLE!!! Definitely felt right at home even though I was nearly 400 miles from it.

People from all walks of life including  parents, children, old schoolers, new schoolers, bikers, MetalHEads, Goths, etc…. the list goes on, attended this event. They were there for a show and by God there was going to be a show; rain or Shine. The gates opened and in we went. The initial crowd numbered at about 2,000 and definitely grew as the day went on. Not surprisingly, the crowd exploded when Rob Zombie took the stage. Early on there were some very notable performances on all stages, and amongst the bands there  I was most impressed with were:

“Motionless In White” from PA, which is not really not my type of music, but they completely blew me away with their live show.  Off energy alone they had the whole crowd going off, they were loud, aggressive and in your face.

“BattleCross” from Detroit, MI. Truly one of the hottest bands this year and with good reason. Totally amazing live who have a great mix of old and new school heavy metal. They are an incredible group of musicians and I can see them establishing themselves amongst the elite in the metal world.

Overall Mayhem Festival was AMAZING! It’s not often that we get a culmination of such talent to gather at one event. Thank you very much to Rock Star Energy drinks for sponsoring Mayhem and to Adrenaline PR for allowing us to cover the festival in its entirety. Keep an eye on these bands as they are the future of Metal and I am excited to see where we are heading from here!
Metal Master Kingdom's Album/Song review & Photo Request submission form here. ​​